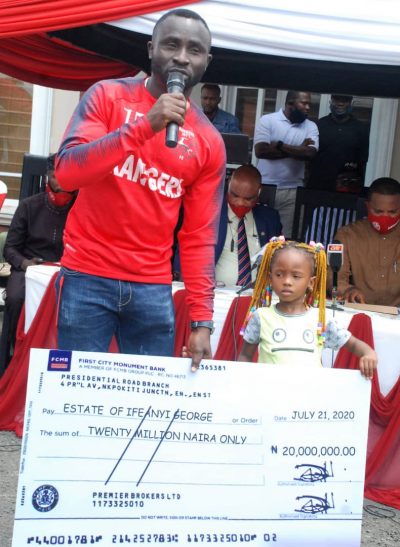 It turned out an emotional moment at Rangers’ camp on Nkponkiti Road, Enugu, Tuesday as the hierarchy of the Coal City Flying Antelopes presented a cheque of N20m to the family of their late striker, Ifeanyi George, Completesports.com reports.

The sum represents the player’s life insurance policy which Enugu State Government headed by The. Hon. Ifeanyi Ugwuanyi, graciously approved for each and every player and official of the club.

George met his untimely death in March in an auto crash in Abudu, Edo State, while on his way to Lagos to reunite with his family following the suspension of the 2019/2020 NPFL in the aftermath of the Coronavirus pandemic outbreak.

And the hierarchy of the NPFL giants chose July 21 for the event being the birth date of the player.

The former Enyimba front man was supposed to mark his 27th birthday day on Tuesday, same day The N20m comprehensive insurance was presented to the family he left behind.

It was the first of its kind in the country for a late player’s family to receive a comprehensive life insurance policy benefit and Rangers General Manager Davidson Owumi proudly and confidently told Complete Sports that the club was a trail blazer in uplifting the welfare of its players.

Top government functionaries, captains of industries, football administrators and other stakeholders in the game were in full presence at the club’s players’ camp, Nkponkiti, Enugu.

It was indeed an emotional moment and outpouring of encomiums on the government of Enugu State and management of the club. 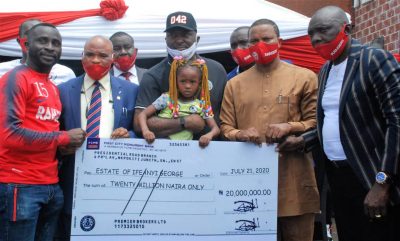 Nzekwe commended the management of the club and stressed that the governor was sad at the sudden death of the player. He consoled the family left behind by the late Ifeanyi George.

“Sincerely speaking, it is a very painful moment to talk of the death of Ifeanyi George, but it is also good that we are here, through the benevolence of the sports-loving governor of the state, Rt. Hon. Ifeanyi Ugwuanyi, to present the insurance benefit of a dedicated player, late Ifeanyi George, who was supposed to be celebrating his birthday with us today,” Owumi stated.

The Managing Director/Chief Executive Officer of Premier Brokers Ltd., Sir. Goddy Ahuakagha, said: “what we have come here today to do was made possible because we have a listening and caring governor, H.E, Rt. Hon. Ifeanyi Ugwuanyi, the executive governor of Enugu state who graciously approved this insurance policy.

“The provision of the insurance policy, the Group Personal Accident Insurance Package was put in place to attract the best legs to the club,” he added. 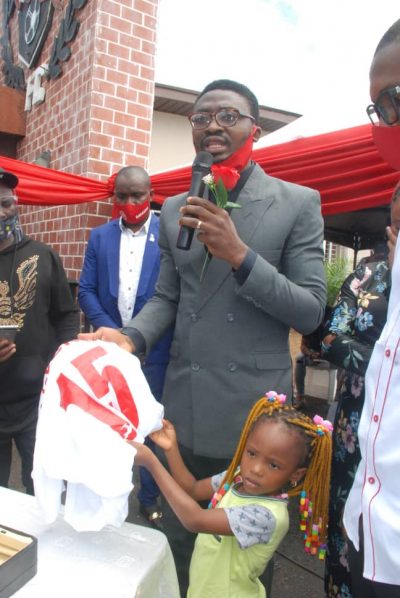 Kola Daniel, who represented Sunday Dare the Sports Minister lauded the management of Rangers for ensuring that welfare of players was accorded top priority.

He pointed out that this is policy thrust of the Sunday Dare led Sports Ministry, insisting it was working in concert with the NFF to push this through, having submitted a blueprint to this effect to the NFF.

“This is a very remarkable event in the history of club football in the country and deserves a lot of commendation for the club management and the government of Enugu State for putting together an insurance policy that will take care of its players and officials,” the Minister’s said through Daniel.

He added: “I urge other football clubs in the country to toe this line for the better performance of our footballers.

“If this is done, it will give our players hope, confidence and commitment in the domestic league.

“It will also give a positive corporate image to the league such that sponsors would come in.”

The family of late Ifeanyi George did not leave the event without uttering a word.

The family delegation was led by Sunday George Onwubiko.

“We are sincerely appreciative of the efforts of Rangers management and the state government in honoring our late brother, Ifeanyi George Onwubiko.

“It is our wish to still have our brother with us but we can’t question God,” George Onwubiko said.

A breakdown of the total sum presented to the late Ifeanyi George’s family, shows that his four-year-old daughter, Abigail Ifeanyi George is entitled to N8m.

This amount was used to open an education fund account for her which will only be accessed on her attainment of the age of eighteen (18) Years with two million naira (N2m) set aside for her upkeep.

The remaining family members will have the balance (N10m).