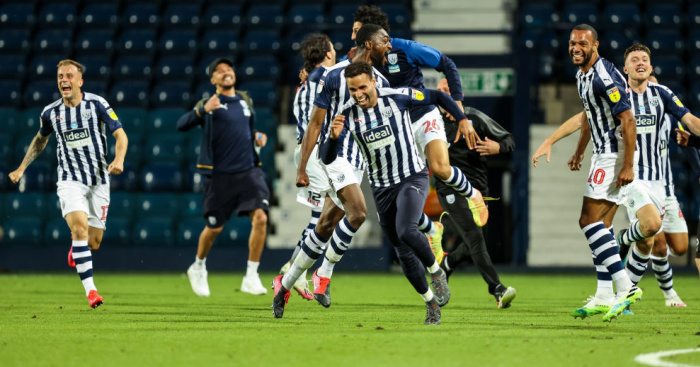 Eberechi Eze got on the score sheet but it was not enough as Semi Ajayi and his West Bromwich Albion teammates held QPR to a 2-2 draw at the Hawthorns and gain automatic promotion back to the Premier League on the final day of the Championship season, Completesports.com reports.

The draw proved to be enough for West Brom to secure a return to the top flight, as Brentford were beaten by Barnsley.

Ryan Manning fired QPR in front on 34 minutes to threaten heartbreak for West Brom, but strikes from Grady Diangana (44th minute) and Callum Robinson (49th minute) triggered scenes of jubilation at the Hawthorns.

In the 61st minute Eze got QPR back on level terms but Albion held on for a point.

The outcome of the West Brom vs QPR game means Brentford and Fulham are consigned to the playoffs along with Cardiff and Swansea as they bid to join West Brom and champions Leeds – who hammered Charlton 4-0 – in the Premier League.

Ajayi who was  in action for 90 minutes, ended the season with 43 league appearances scoring five goals.

For Eze, he netted his 13th goal in the league in  his 46th appearance while Bright Osayi-Samuel, who came on in the second half, featured in his 37th campaign netting five goals.

Meanwhile, it was a sad story for Super Eagles defender Leon Balogun as Wigan Athletic were relegated from thw Championship down to League One (third division).

Wigan Athletic, whose final fixture ended 1-1 against visiting Fulham, were relegated from the Championship after they were deducted 12-point for going into administration.

The Latics dropped down to 23rd position with 47 points in the 24-team Championship final standing.

Their hopes now rest on an appeal against the sanction.