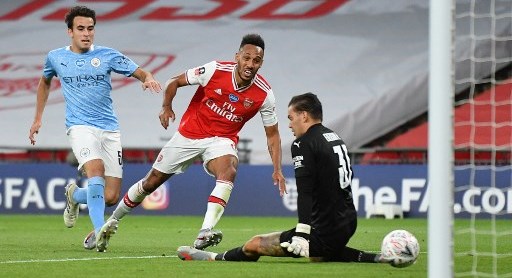 Arsenal skipper, Pierre-Emerick Aubameyang, is still hopeful of a summer transfer to Laliga giants Barcelona according to reports in Spain.

Aubameyang, who has scored 25 goals in all competitions for the Gunners this season, has yet to commit his future to the North London club.

And, according to Spanish newspaper Diario Sport, the 31-year-old still has his heart set on a move to Barcelona.

The story featured on the front page of Diario Sport’s Wednesday edition with the headline ‘Aubameyang still hopes to join Barcelona.’

It has been reported that Aubameyang is Barcelona’s second choice if they fail in their efforts to sign Lautaro Martinez from Inter Milan this summer.

The former Borussia Dortmund striker’s contract at the Emirates Stadium expires next summer and so time is running out for Arsenal to sell him at his full value.

Talks over a contract extension have faltered with Arsenal only able to qualify for the Europa League next season if they beat Chelsea in the FA Cup final.

Martinez has a €111million (£100m) release clause in his contract and with Barcelona taking a considerable financial hit following the Covid-19 crisis, it is far from certain they can match that.

So the Catalans, who missed out on the LaLiga title to rivals Real Madrid, may look elsewhere.

Arsenal manager Mikel Arteta said this week he wants Aubameyang’s future resolved as quickly as possible to ‘calm’ the striker.

He said: “The quicker we do it for me personally the better because the player will be more focused, more determined and more calm.

“But we have to respect the timings as well and the needs that the football club has.”

Aubameyang helped Arsenal qualify for this season’s Emirates FA Cup after bagging a brace in a 2-0 win against holders Manchester City at the weekend.

He is also in the race for this season’s Premier League golden boot award after sharing the award with Liverpool’s duo Sadio Mane and Mohamed Salah.