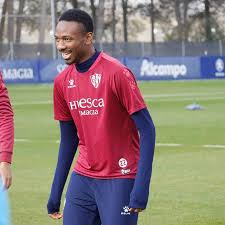 Kelechi Nwakali is thrilled to see SD Huesca secure promotion to LaLiga for the second time in their history, reports Completesports.com.

Miguel Sanchez’s side sealed promotion to LaLiga on Friday after edging out Numancia 3-0 at home.

The win took Huesca to 67 points, two behind leaders Cadiz with one more game left to play.

Nwakali replaced David Ferreiro in the 89th minute of the encounter.

The Azulgranas were first promoted to the Spanish top flight in the 2017/2018 season.

They however suffered relegation after just one season in LaLiga.

Nwakali featured in four league games for Huesca this season.