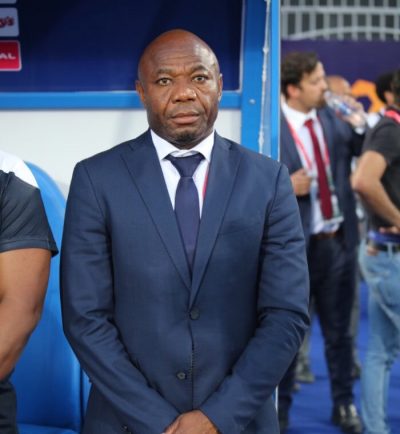 Amuneke: Osimhen, Chukwueze, Nwakali – Products Of Our Hard Work At U17 Level

Nigerian coach, Emmanuel Amuneke, says the performances of the trio of Victor Osimhen, Samuel Chukwueze and Kelechi Nwakali in helping Nigeria win her fifth FIFA U-17 World Cup in Chile five years ago and their progress till date is a reflection of the hard work he and assistants did in discovering players and putting the winning-team together, Completesports.com reports.

Amuneke who is the Sporting Director of Egyptian Premier League side, Misr El Makkasa, told Complete Sports that the incredible run of the players for their respective clubs in Europe and the Nigeria National team, Super Eagles, speaks volume of talents that the country is blessed with.

At the 2015 FIFA U17 tournament in Chile, Osimhen emerged the top scorer with 10 goals, setting a FIFA record as the first player to score in all matches of the tournament, a record earlier held only by Frenchman, Sinama Pongollo.

Nwakali, who captained the Nigerian team on that occasion, was voted as Most Valuable Player, MVP, of the tournament.

Chukwueze is currently on the payroll of Spanish LaLiga side, Villarreal with Osimhen pulling the scoring strings at French Ligue 1 side, OSC Lille while Nwakali plays for Spanish Segunda B side, SD Huesca.

Of the 21 players the former FC Barcelona of Spain left winger took to Chile five years ago, the trio seem more on the flight to the zenith and the ex Tanzania National team handler hail them as great ambassadors of the 2015 World conquering Golden Eaglets.

“I’m happy for them and their careers. Their progress, and that of the other members of the team at the 2015 Championship [FIFA U-17 World Cup] gives me joy,” starts Amuneke when he spoke exclusively to Complete Sports from his base in Egypt.

“It’s God that knows what one would be in his life. Yes, when you look at it from one perspective, they are the standout players and it shows the level of our effort at the time.

“And I believe they are just starting, with more determination, discipline and hard work, they will get much better”.

The duo of Osimhen and Chukwueze have become the major talking points in the European leagues’ transfer market.

Osimhen has been linked to Napoli in the Italian Serie A. The gangling forward had even gone ahead to visit Napoli to check the suitability of the town and club environment as a prelude to a reported €80m transfer deal.

English Premier League Champions, Liverpool had tabled a bid of €35m for Chukwueze which was turned down in January. Chelsea also has the Nigerian youngster on their radar.

Amuneke reckons the players are good enough to play in any big club in Europe.

“Osimhen going to Napoli is not a bad move. He’s a player that likes working hard and I think Napoli will give him opportunity of playing in the UEFA Champions League,” Amuneke said.

Also Read: INTERVIEW – Ann Chiejine: How I Terminated My Coaching Contract In Romania To Save My Life

“Chukwueze can fit in any team. He’s young, fast and uses both legs effectively. Whichever club, but I believe he’s doing well at Villarreal at the moment.”

Amuneke is not like a prophet rejected by his people. Instead, he’s seen as the ‘pathfinder’ of the major sporting successes in his community, Umuokele, Eziobodo, in Owerri West Local Government Area, Imo State.

Being the pioneer footballer from that community to hit national and international limelight, Amuneke paved the way for close to eight other players from the area, including his younger brother, Kingsley, Chidiebere Nwakali, Kelechi Nwakali and Chukwudi Agor, to make it to the national teams and Europe.

For that, Amuneke was given a chieftaincy title of ‘Aka Welitere Mba 1’ [The hand that promoted a town] of Eziokele by the traditional ruler of the community, HRH, Exercise Richard Ngozichukwu Osuji, Ezeudo 1 of Eziobodo. And the one time Zamalek of Egypt winger reflects:

“I really appreciate the gesture. Being recognised by your people shows they love you and believe in what you do or represent,” Amuneke said.

“All I’m doing is not by my power but by the grace of God.

“God knows why he has given each of us different talents, but we have to identify our talents and use them to the glory of God.

“Yes, I’ve had to be around (home) a few times, you know the nature of our work but then, we do communicate regularly.”