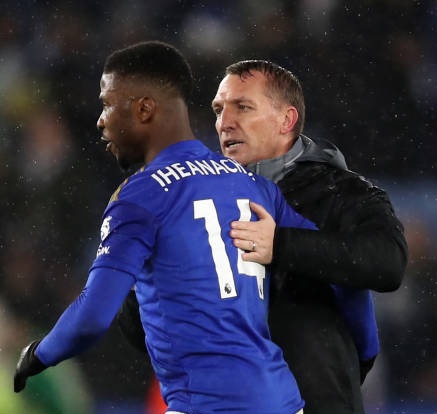 Leicester City manager Brendan Rodgers says the decision to replace Kelechi Iheanacho at half-time in Sunday’s 4-1 defeat against Bournemouth was a tactical one, reports Completesports.com.

Iheanacho, who played a key role in Jamie Vardy’s opening goal at the Vitality Stadium was replaced at half-time by Dennis Praet.

The Foxes controlled the game in the first half and led 1-0, before conceding four times after the break.

“(Iheanacho) wasn’t having one of his better games,” said Rodgers in his post-match press conference. “

The issue for us defensively was on the side of the pitch, because there was a lot of space for Wilf and Youri to cover.

“So we pushed Ayo on, he was playing well, and added an extra midfielder in to help cover.

“But the defeat wasn’t tactical, it was about the spirit.”

Iheanacho has featured in 18 league appearances for the Foxes this season and scored five goals.