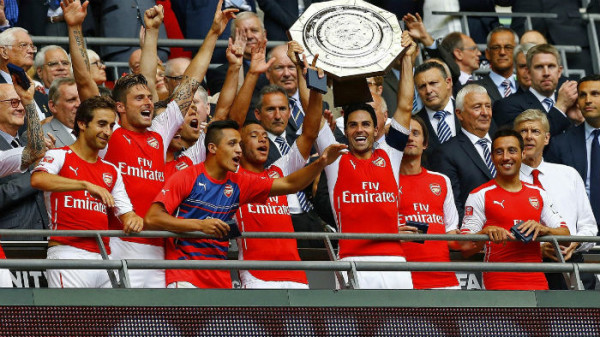 Arsenal are reportedly being lined up for the Community Shield regardless of next weekend’s Emirates FA Cup semi-final result against Manchester City.

Liverpool will play in the Wembley showpiece next month for the second season running after lifting their first-ever Premier League title.

Yet there is confusion whether Jurgen Klopp’s side, who lost last season’s curtain-raiser, can avenge their defeat against the eventual FA Cup winners.

That’s because three of the competition’s semi-finalists – Manchester United, City and Chelsea – are currently involved in European competition.

The FA are said to be keen to stage the Community Shield around the end of August which would pose problems for teams still in the Champions or Europa League.

Although the showpiece is traditionally played between the league champions and FA Cup winners, English football’s governing body is determined to host the game as planned.

According to the Daily Mail, if the eventual FA Cup winners are unable to play in the Community Shield, the association’s preferred choice to face Liverpool would be Arsenal.

The Gunners are the only team in the semi-final who are have no European commitments.

The North London side are also the Community Shield’s most successful team, having lifted it 15 times.

One alternative suggestion is that the FA Cup winners’ place could go to the winners of the Championship – which would likely be either Leeds or West Brom.

United have been heavily tipped to reach the final of the Europa League on August 21, having taken a 5-0 first-leg lead against LASK in the quarters.

Pep Guardiola’s men host Real Madrid holding a 2-1 lead from the first leg at the Bernabeu and will then face either Lyon or Juventus.

But Chelsea have a mountain to climb as they visit Bayern Munich on August 8 trailing 3-0 from the first leg.