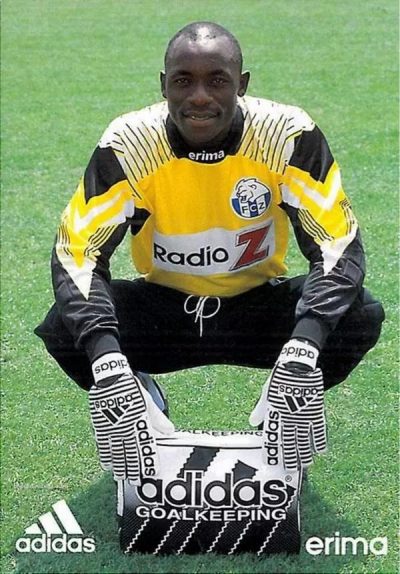 “I was playing for FC Zurich of Switzerland then,” starts the onetime Shooting Stars Sports Club (3SC) shot-stopper.

“It was a local derby match against Grasshoppers. It was the second to the last match of the season and I sustained an arm injury.

“It was so bad that I didn’t just only miss the Super Eagles World Cup in France, but also stayed out of action for six months. And you know, in football, goalkeeping is a special area that once you are out and the reserve keeper comes in and does well, it becomes difficult for you to reclaim your position.

Shorunmu during his time at FC Zurich colours

“But I was lucky that after I recovered, the FC Zurich coach restored me to my psition.
But in truth, that was the biggest downside of my career.”

Shorunmu made 72 appearances for FC Zurich in all competitions as well as 36 caps for the Super Eagles.

That year, 1998, Super Eagles were engulfed in goalkeeping crisis leading to Peter Rufal been called up at the last minute, forcing Dodo Mayana to honour the giobal feast of football after receiving an unexpected phone call to that effect while winding off in a night club in Spain.

Shorunmu is now a coach and has served as Super Eagies goalkeepers trainer twice, as well as managerial spells at Enyimba, Heartland and FC Ifeany Ubah.