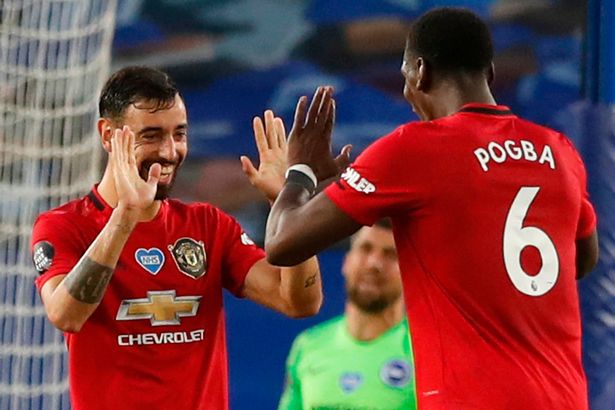 Manchester United midfield duo Paul Pogba and Bruno Fernandes were both injured in a training ground collision.
The two midfielders are doubtful for United’s Saturday’s game with Bournemouth at Old Trafford.

The accidental clash occurred when Pogba ran into Fernandes as Solskjaer put his squad through their paces at Carrington.

Both men were taken away for treatment – with Fernandes appearing to come off worse.

United refused to comment on a situation that could affect Solskjaer’s selection with the game against the relegation-threatened Bournemouth less than 24 hours away.

It’s a blow that could not have come at a worse time for the Reds with big games coming thick and fast.

Pogba and Fernandes linked up impressively as United thumped Brighton 3-0 on Tuesday to extend their unbeaten run to 15 games.

Fernandes, a £47million signing from Sporting Lisbon in January, continued his impressive form with a double at the Amex Stadium.

And his arrival at United has also sparked Pogba into life after a season spent battling an ankle injury that required surgery.

Solskjaer has been nursing the French World Cup winner back into his team since the season resumed.

And the United boss was hoping that his two creative talents would help propel his team to silverware and the Champions League.

United are currently fifth in the table, two points behind Chelsea and three adrift of third-placed Leicester, with six games to go