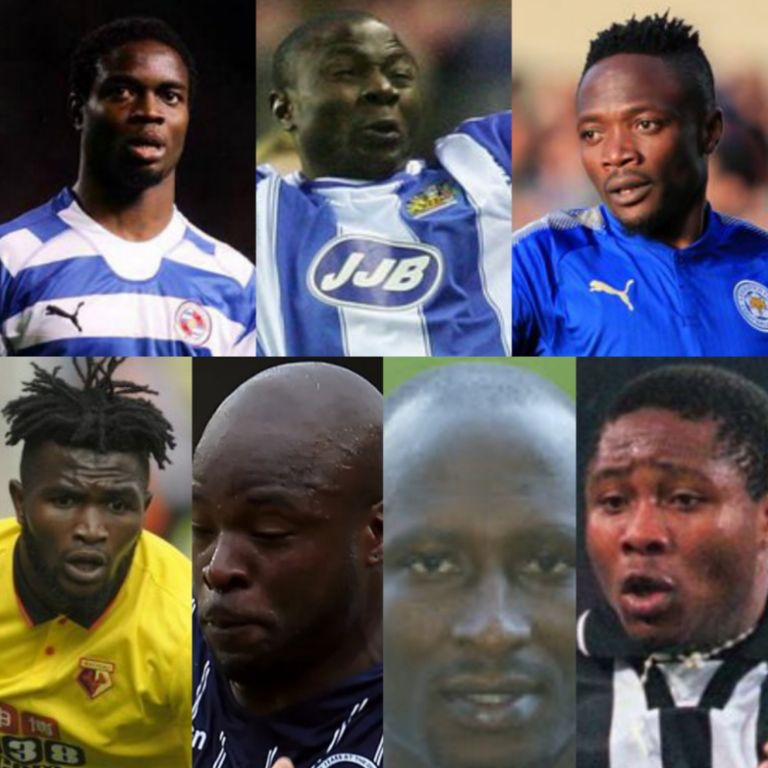 42 Nigerian footballers have played in the history of the English Premier League since the competition kicked off in the 1992/93 season and while many have shone, some others have flopped big time.

There are, however, some other Nigerian players who failed to make any major impact in the English top-flight. Complete Sports’ OLUYEMI OGUNSEYIN in this piece writes about seven Nigerians who failed to shine in the EPL…

Okeremute Samuel Sodje who was born in England to Nigerian parents and represented the Super Eagles of Nigeria on the international scene did not have a Premier League career to reckon with.

Sodje turned down a move to Southampton on 31 January 2006, the final day of the transfer window. Much speculation followed until it was announced on 12 July 2006 he would join Reading subject to a medical with the move being completed on 14 July, 2006.

However, the move turned out to be a huge disappointment as the former central defender went ahead to make a hugely disappointing three EPL appearances for Reading all through the 2006/07 season.

In the summer transfer window of 2007, Sheffield Wednesday agreed a fee with Reading for Sodje with the player given the opportunity to think over the move. However, Sodje eventually joined Charlton Athletic on loan for the remainder of the
2007–08 season.

Julius Aghahowa had been one of the most feared marksmen in Europe for Shakhtar Donestk, helping the Ukrainian Premier League side with countless goals that had secured several league titles and respect on the continent of Europe.

Finally, he would get his dream move to the Premier League but not to one of the top sides that had courted his signature in the past seasons and instead to a really struggling Wigan Athletic side where he himself also struggled.

A year and a half with the Latics yielded no fun, no drama and not one single goal for the Nigerian striker after making as many as 20 appearances and the Premier League honeymoon was quickly brought to an abrupt end.

And by not finding the back of the net even on just one occasion for Wigan in the English top-flight, one would be forgiven if one thought that the pacy forward was actually deployed in the defense.

When Ahmed Musa joined Leicester City in the summer transfer window of 2016, he joined them, having conquered all and sundry in the Russian Premier League with former club, CSKA Moscow where he won three titles, one FA Cup and two Super Cups.

It is, however, so sad that the Super Eagles captain could only score on two occasions before making his departure from the Foxes in the year 2018. His name also emerged among the worst players in Premier League history.

The forward who now plays for Al Nassr FC in the Saudi Arabian professional Football League has been mentioned in FourFourTwo
magazine’s to be one of the worst 50 players in the history of the English Premier League.

Musa was ranked at number 44, having scored a disappoointing two goals in 21 EPL games in two seasons. Musa who joined Leicester not long after they won the title in 2016 had a disastrous performance in England.

FourFourTwo wrote in their report: “In the glow of their Premier League-winning season, Leicester broke their transfer record to bring Musa to England for £16.6m from CSKA Moscow.

“The Nigerian forward has always been an unremarkable and patchy player who most importantly didn’t have a natural place in the Foxes side. At no point in his 18 months at the King Power Stadium (33 games, five goals) did Musa’s transfer ever look
likely to be remotely successful.”

Former Nigerian youth international, Isaac Success who is on the roster of Watford in England is another player who has failed to take his once very promising football career to the next level.

This is simply because the attacker’s situation at Watford appears to be deteriorating with lack of playing time and that has been the case under three managers so far this season.

Under three managers at Vicarage Road so far during the 2019–20 season, Javi Gracia, previous boss, Quique Sanchez Flores and incumbent, Nigel Pearson, Success has failed to get a look-in.

It is disheartening that the 24-year-old who won the FIFA Under-17 World Cup with the Golden Eaglets of Nigeria in 2013 has played only 54 EPL matches with just 11 starts since joining the Hornets in 2016, scoring twice and making two other assists.

The fringe Super Eagles striker has so far made a hugely disappointing five substitute appearances in the English elite division this season without even a goal or assist to his name.

Success will be all out to salvage his English Premier League (EPL) career which has been anything but successful when the 2019/20 season restarts on Wednesday, 17 June.

It is such a huge disappointment to know that Danny Shittu made only 40 appearances in the Premier League despite being on the rosters of five different club-sides in the elite division.

What this implies is that Shittu played just eight English top-flight games each for the likes of Charlton Athletic, West Bromwich Albion, Watford, Bolton Wanderers and Queens Park Rangers.

And a quick check on his record on premierleague.com revealed the Lagos-born Shittu who started his career at Charlton failed to play a single EPL game from the 2000/2001 season until 2005/2006.

He played for some English clubs apart from Charlton before finally tasting EPL football with Watford in 2006 and was a part of a defense line that conceded the most goals leading to the Hornets being relegated.

Shittu made a quick comeback to the Premier League with Bolton in 2008 but a mere 10 appearances in his first season and not a single one the following term ensured his EPL career did not go according to plan.

The ex-defender who is now 39 years of age who had 33 international caps for the Super Eagles of Nigeria was later unceremoniously released by Bolton.

Former Nigerian international who attended the 2000 Summer Olympics in Sydney, Blessing Kaku is certainly one of the players from the West African nation who will not be proud of his Premier League sojourn.

The former midfielder’s Premier League playing career shows he made a move to Bolton Wanderers prior to the 2004/2005 season but after making just an appearance in a whole campaign, he was shipped out immediately.

Kaku who is now 42-years-old thereafter became a journey man of some sort after playing for five other clubs such as Derby County, Maccabi Tel Aviv, F.C. Ashdod, Maccabi Petah Tikva and Enosis Neon Paralimni.

His transfer from F.C. Ashdod to Bolton in 2004 is one of those about which the Stevens inquiry report in June 2007 expressed concerns because of the apparent conflict of interest between agent, Craig Allardyce, his father, Sam Allardyce, the then manager at Bolton and the club itself.

Ifeanyi Udeze can be said to have had a quite impressive career on the international stage, having shone with the Super Eagles of Nigeria but his Premier League spell is definitely nothing to write home about.

Udeze played for clubs such as Bendel Insurance FC, AO Kavalas (Greece) and PAOK Thessaloniki before joining West Bromwich Albion in the winter transfer window of the year 2003.

In his first season with the Baggies, the former left full-back played in the Premier League, joining the club on loan in the latter stages of the season after which Albion were relegated.

Udeze who is now a radio broadcaster with Brila 88.9 FM was released from AEK Athens on January 2007, six months after signing a three-year contract on 11 August, 2006.