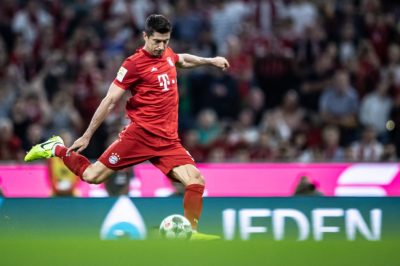 Bundesliga 2019/20: All Spots Still Up For Grabs! Bayern May Win Title Today

The final englische Woche [mid-week games] of the season rolls into town with just three matches left to play for the Bundesliga’s 18 teams, and every single place in the table still up for grabs. However, top and bottom could be decided on Tuesday…

Perhaps most importantly, league leaders FC Bayern Munich are now just one win away from clinching their eighth consecutive Bundesliga Meisterschale. After beating Borussia Monchengladbach last Saturday, Hansi Flick’s side know that victory against relegation-threatened SV Werder Bremen will do the job.

Bremen will not give up the points easily, however. They currently sit level with Fortuna Düsseldorf on 28 points, with Fortuna still in the relegation play-off spot as it stands.

Robert Lewandowski scores a goal with a penalty kick during the match between FC Bayern Munich and Hertha BSC at Allianz Arena on 16 August 2019.

The other position up for grabs is one that no side wants to land in. SC Paderborn sit bottom of the pile, nine points adrift of safety with only nine points left to play for. Only a maximum points haul will do for Steffen Baumgart’s side, whilst they need their rivals to also lose every single game they have left. There is a glimmer of
hope for Paderborn if they can beat fellow promoted side 1. FC Union Berlin, otherwise they will make an immediate return to Bundesliga 2.

The first game of the midweek fixtures will be at Borussia-Park as Borussia
Monchengladbach host VfL Wolfsburg. The home side have dropped to one point behind rivals Bayer Leverkusen in the race for the final UEFA Champions League qualification spot, while the travelling Wolves sit three points inside sixth place with UEFA Europa League qualification their most realistic goal.

SC Freiburg play host to Hertha Berlin in the last Tuesday fixture. A wounded Berlin will be looking to get back into the swing of winning after failing to pick up points against Borussia Dortmund and Eintracht Frankfurt in its last two outings. Meanwhile the Black Forest side will fight tooth and nail to secure the win to keep its hopes of playing European football next season alive. 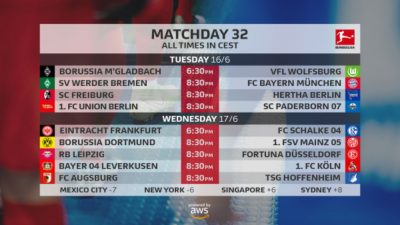 The action continues again on Wednesday with Eintracht Frankfurt hosting FC Schalke 04 to start, with the two sides separated by just one point between their ninth and tenth places in the table.

Borussia Dortmund welcome relegation-threatened Mainz to the Signal Iduna Park later in the evening, by which time they will know if their title challenge has come up short for a second consecutive season. Third-place RB Leipzig host Fortuna Dusseldorf at the same time, with the away side sat in that relegation play-off spot, three points behind Mainz

Elsewhere, Bayer 04 Leverkusen meet Rhine rivals 1. FC Köln at the BayArena with the home side still in with a great chance of securing Champions League football for the 2020/21 campaign. Also, FC Augsburg will face TSG 1899 Hoffenheim with the hosts’ place in the league for next season almost confirmed, while the away side are
the closest challengers to Wolfsburg’s Europa League place with just three points to make up on them.