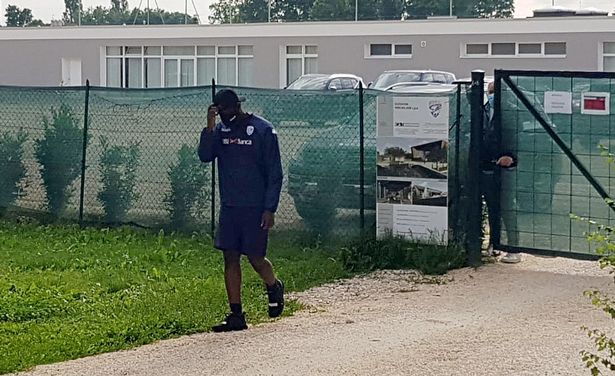 Mario Balotelli saga at Brescia took an embarrassing twist after the striker was refused entry to the club’s training ground on Tuesday.

Balotelli’s deal at Brescia is due to be terminated after he missed several training sessions, frustrating club owner Massimo Cellino.

While the termination is yet to be finalised, Balotelli has still made attempts to attend training, but was turned away at the gates.

A video posted on social media shows Balotelli approaching the gates, before security personnel informed him he would not be allowed in.

As reported by Gazzetta dello Sport, Balotelli had previously sent a medical certificate to Brescia informing them he was unable to train, which is due to expire on Wednesday.

He had been suffering from a bout of gastroenteritus, but had recovered prior to Tuesday’s training session.

However by the time he had informed the club he would be attending the session, there was nobody in the office to deal with the necessary administration enabling him to take part.

If Balotelli was to join in with training and fall unwell or suffer injury, Brescia would not be covered by insurance.

He was seen making a call on his mobile before jumping back into his car and leaving the facility.

It is the latest incident involving Balotelli at the club, who have already decided to cut their losses with the former Inter Milan and Manchester City striker.

Brescia only re-signed Balotelli back in August on a three-year deal, though the contract contains a break clause after a season if the club are relegated.

They are currently rooted to the foot of the table and unlikely to beat the drop, leading Cellino to make the decision to call time on the relationship early.

The former Leeds chief has been particularly irked by Balotelli’s behaviour, after he was absent from a number of training sessions earlier in the year, before missing another last week.

Brescia’s lawyers are now in contact with Balotelli’s legal team over terminating the contract, leaving him as a free agent.

Cellino told the BBC’s World Football programme : “I think we both made a mistake.

“I thought that coming to Brescia, which is his town, would commit him very much.

“At the same time, I think he was handled the wrong way by my previous coach [Eugenio Corini].

“He doesn’t show up to training, he doesn’t look very committed let’s say, for the future of the club. That’s the problem.

“Balotelli apparently doesn’t like to stay in Italy anymore because he’s not acting that way.”