576-History of Sports In Nigeria

History of Sports In Nigeria

Posted by Eric Aghadiuno on

Before independence, few Nigerians had taken the world

sporting arena by storm, beating close rivals to emerge champions.One remembers the likes of Emmanuel lfejuna who won a gold medal in high jump during the Commonwealth games in 1954, Hogan 'Kid' Bassey who became the world featherweight boxing king in 1957 and Dick Tiger who won the middleweight crown and later the world light heavyweight crown.

Within 34 years, Nigerian sportsmen and women have entrenched Nigeria's name firmly on the map of great sporting nations. Though, the country is yet to win a gold medal in the Olympics, the country is known to possess great athletes and that it is a matter of time before the country gets to the optimum in the global fiesta.

Sports began to take serious roots in the country in 1963 when the National Sports Commission (NSC) began to function under Abraham Ordia as secretary. The 60's was a period of laying foundations and the only visible achievement was the qualification of Nigeria's Green Eagles for the Olympic games held in Mexico in 1968.

In 1973, Nigeria hosted the 2nd All-Africa games in Lagos and also introduced the national sports festival as a way of discovering athletes to represent the country try in continental and international meets. The first meeting in Lagos attracted about 6,000 athletes.

The 1970's also witnessed tremendous achievements. Nigeria's senior football team won a gold medal in the 2nd All-Africa games while the country's contingent to the games won an overall Second position on the medals table. 1976 and 1977 saw the country tasting victories in continental championships through IICC Shooting Stars and Rangers International of Enugu in the Cup Winners Cup Competition.

The country's record of achievements continued in the 1980s with series of achievements especially in football. The bronze medals won in 1976 and 1978 in the African Cup of Nations was improved upon in 1980. The Christian Chukwu led Green Eagles won the Cup for the first time in Lagos. In 1984 and 1988, Nigeria again got to the finals of that championship but lost to Cameroon on both occasions to win the silver medals.

Surprisingly too, Nigeria's Junior Eagles qualified for the first time to represent Africa in a Junior World Cup in Mexico. Although, Nigeria did not go beyond the first round having lost 0-3 to Brazil she beat highly rated USSR 1-0 and held Netherlands to a goalless draw.

In 1985, Nigeria's under-17 football team went to China and conquered the world in the first ever FIFA under-17 World Cup. The victory took Nigerian football to a high pedestal, setting the stage for a respect of Nigeria in international competitions. To prove a point of Nigeria's new found strength in football, the Nations under-21 team went to Saudi Arabia for the World Cup in 1989 and lost narrowly in the final to Portugal. The "miracle of Damman", Nigeria's victory over USSR after trailing four goals behind and with only twenty- five minutes left, stunned the world during the championship.

The country did not only excel in football in the 80s as athletics provided opportunities for splendid performances. Five U.S. based Nigerians won gold medals at the World University games which took place in Edmonton, Canada: Sunday Uti (400m), Yusuf Ali (long jump), Ajayi Agbebaku (triple jump). Innocent Egbunike (200m), and Chidi Imoh (100m). Nigeria went to the Olympic games in Los Angeles in 1984 and came back home with a silver medal in boxing through the efforts of Peter Konyegwachie and a bronze from the 4 x 400m male team led by Innocent Egbunike. There has been a remarkable improvement over the achievements of the 1970s and 80s in the 90s. The exploits and potentials f?f Nigerian abroad have been tapped for the benefit of the country and the result has been very impressive.

First was the 1990 Commonwealth games in Auckland, New Zealand. Nigeria did marvelously well, winning five gold, 13 silver and seven bronze medals. A far improvement from previous outings. The returns from the recently-concluded games in Victoria, Canada even exceeded that of 1990. Nigerians returned home with 13 gold medals and many silver and bronze medals.

With the euphoria of the 1990 games, the country stormed the Barcelona Olympic games in 1992 and again there was an improvement from previous records. The quartet of Olapade Adenikan, Chidi Imoh, Kayode Oluyemi and Davidson Ezinwa won the silver in the 4 x 100m, while the women led by irrepressible Mary Onyali captured the bronze medal in the same event. Two Nigerian boxers also won silver medals. It was a moment of joy for all Nigerians. Football in the 90's took Nigeria to greater heights. Between 1990 and 1994, Nigeria won silver, bronze and gold medals in the biannual Africa Cup of Nations competition. The latest victory coming fourteen years after winning the cup in Lagos.

Before now, BCC Lions FC of Gboko had won the Mandela Cup in 1990 while Shooting Stars Football Club of Ibadan won the maiden edition of the con- federation of African Football (CAF) cup in 1992. Bendel Insurance FC of Benin added more feathers by winning back the CAF cup in 1994 but also added the West African Football Union (WAFU) cup to her kitty.

Nigeria qualified for the first time to represent Africa in a senior World Cup and did it in grand style. She became the first country to win her first World Cup match and the first to advance beyond the first round in her attempt. Although the Eagles lost in the second round, they had stunned the world and Nigerian stars have become the toast of big football clubs all over the world.

The feat performed by the Golden Eaglets in Japan is memorable. For the second time, Nigeria won the FIFA under -17 championship making her the only country to achieve such feats. In a world of football giants like Brazil, Italy, Germany and Argentina, the feat of the Golden Eaglets and Nigeria is indeed spectacular.

In spite of these successes, the country's sporting world has tasted setbacks, disappointments and tragedies. Nigeria football suffered a major setback in 1977 when Nigeria's Godwin Odiye's own-goal stopped the country from attending her first world cup competition in 1978. Other disappointments were in 1981 and 1989 when Nigeria was stopped by Algeria and Cameroon respectively under painful circumstances.

In 1989, FIFA sledgehammer fell on Nigeria and she was subsequently banned for two years from participating in age grade competitions due to discrepancies in ages of players who had played for Nigeria.

The Seoul Olympics of 1988 was another disaster for Nigerian athletes. Again like in 1980, the athletes came . back without a single medal. Worst still was the Green Eagles team which had gone to the games as favorite but completely lost out. The death of Dele Udoh, Nigeria's most promising 400m gold medal hope in 1979 took the sports community in Nigeria by surprise. He was killed by the police in a checkpoint in Lagos when he came to participate in an athletic meeting from the USA.

Also in 1979, a clash between supporters of UCC Shooting Stars FC of lbadan and Bendel Insurance of Benin after a challenge cup semi-final match in Lagos in which the Benin team lost 0-2 led to the death of twenty-six people. It was tragic. Another tragedy that hit the soccer world was the death of a patriotic soccer wizard, Sam Okwaraji who slumped and died at the national stadium in a world cup qualifying match against Angola. It was a horrifying experience as Nigerians had begun to appreciate not only the football skills of the late player but his patriotic zeal which were unparalleled. 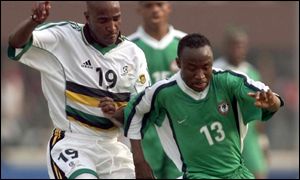 FC returning from a continental engagement were involved in a plane crash. Two players - Animnwosa Omale and Uche Ikeogu with three crew members lost their lives while many others were seriously injured.

Kayode Oluyemi, a member of the Nigerian silver winning team at the Barcelona Olympics was involved in a ghastly motor accident which claimed his life while Sunday Uti another great athlete is ruled out of sports for life as he had a broken leg. The setbacks of Nigerian sports these past 41 years notwithstanding, Nigeria has remained a darling nation to sports lovers all over the world.