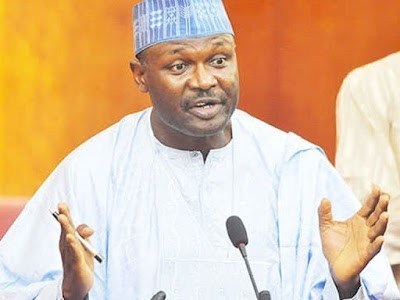 The Independent National Electoral Commission lNEC has promised to go ahead with Saturday’s Governorship and State Assembly Elections in Akwa Ibom state, saying it has replaced the 198 smart card readers, voter register and other items destroyed in its lbesikpo Asutan Local Government Area office in the State.

This was contained in a statement issued Friday night in Abuja and signed by its National Commissioner and Chairman of its Information and Voted Education Committee, Festus Okoye.

The inferno which occurred in the early hours of Friday did not however affect ballot papers. Part of the INEC statement reads; “While we do not at this point know the cause of the fire, a report has been made to the law enforcement agencies and the Fire Service. We are liaising closely with both agencies to investigate and ascertain the cause of the fire and if found to be a deliberate act, we will ensure diligent and vigorous prosecution of those responsible. “Several sensitive and non-sensitive materials for tomorrow’s‘s Governorship and State House of Assembly elections were destroyed including 198 Smart Card Readers, the printed Register of Voters, 13 Generators as well as several Voting Cubicles and office equipment. “Fortunately, the ballot papers and result sheets for the elections were not affected and are intact. Acting timeously, the Commission has been able to replace and reconfigure all the destroyed Smart Card Readers and reprinted the Register of Voters. With the replacement and the salvage of other items, we are pleased to announce that the election will proceed as scheduled. All registered voters in the Local Government Area are therefore requested to turn up to cast their votes between 8am and 2pm tomorrow”. The Commission said it has also been informed of the death of Hon. Adamu Kwanate, who until his death was the member representing Nassarawo Binyeri State Constituency (Mayo Belwa LGA) in the Adamawa State House of Assembly. He was also the candidate of the All Progressives Congress APC in the same Constituency in the election scheduled for Saturday 9th March. “Consequently, INEC is compelled to countermand the Nassarawo Binyeri State Constituency election for tomorrow and the same has been rescheduled to Saturday 23rd March. 2019 in line with Section 36(1) of the Electoral Act (2010) as amended. The Governorship election in the constituency and all other state constituencies elections will however proceed as scheduled tomorrow (Saturday)”.