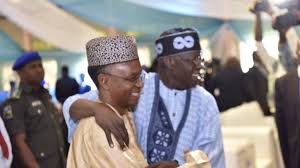 After his posters for the 2023 presidency surfaced a couple of times in Kaduna and Abuja, some hardball politicking about how much rotational presidency sucks, and a few sucker jabs at another likely aspirant, Kaduna Governor Mallam Nasir El-Rufai has made a u-turn.

Presidency should now rotate–away from the north–to the south where a major contender identified so far now is the APC National Leader Bola Tinubu. His posters, too, have been creeping up billboards intermittently in Lagos, and his foot soldiers have fanned out across the country.

El-Rufai has not specified which part of the south yet, but his new stand is music to the ears of those who thought he had been positioning himself all along.

According to him, it would be unjustified for the North to seek to retain the Presidency after President Muhammadu Buhari might have completed his eight years.

“The general political consensus in Nigeria is that the Presidency should rotate between the North and the South. It is not written but everyone understands it,” a report by the Vanguard quoted him as saying.

“In some of the parties, like the PDP, it is even written down in their constitution but it was breached in 2015. I think that every politician of honour should understand and abide by that consensus except there is an extenuating circumstance compelling it to be set aside. What could this be?

“President Yar’Adua died in office and it was compulsory for Jonathan to continue but when 2011 election came, there were many people who insisted that Jonathan should step aside for a northerner to complete the tenure of Yar’Adua but I opposed it because I didn’t think it was proper for an incumbent that got there not by his own design should be stopped from contesting when the constitution has not barred him from running.

“In the APC, we deliberately omitted rotational Presidency in our constitution and the emergence of a presidential candidate does not take into account zoning and that was why in 2015, Rochas Okorocha from the East contested, Sam Nda-Isaiah contested, Buhari, Kwankwaso and others contested.

“I can say that as distinct from the PDP, APC has no rotational Presidency but candidates are selected strictly on the basis of political merit and the general acceptability of the candidate.”

For that unwritten piece of constitution and mutual trust that originates from gentleman agreements, El – Rufai is actually proud of his party, his decision, and his north.

“I want to say that those of us from Northern Nigeria honour agreements. We do not violate unwritten political agreements and I will be the last person to lead in violating that agreement,” he said.

The north–or Buhari–is believed to have a sweetheart deal with Tinubu, the arrowhead of the southwestern dominant party ACN that formed part of the APC merger in 2013, and deal got mutually benefiting in 2019 when Tinubu went all out to support Buhari, sick and no-performing, for re-election.

The deal, many say, is for Tinubu to have shot at the presidency in 2023, too.

But El-Rufai’s initial opposition and subtle attack on Tinubu and his southwest made it look like the Kaduna governor didn’t care about any deal between Buhri and Tinubu.

“I may have a personal view but that should be the basis. I don’t care where you come from but I look for merit,” he said.

He added hat the APC norther leaders now will settle down and endorse somebody from the south.

In the event Tinubu suits their books, El-Rufai, as some analysts observe, could end up a running mate.

Yet there’s a snag: selling a Tinubu-El-Rufai ticket won’t wash. Both are Muslims in a country where religion has become a lever for instability.