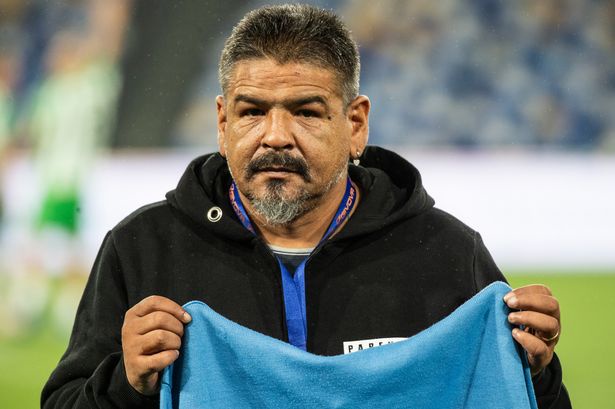 Diego Maradona’s younger brother Hugo has died at the age of 52 following a heart attack.

Hugo Maradona passed away on Tuesday in Naples, just over a year after the death of Diego led to an outpouring of grief in Argentina and across the football-loving world.

La Gazzetta dello Sport reported that Hugo was found dead at his home after he suffered a cardiac arrest.

The younger Maradona was an Argentina youth international, and played for Ascoli in Italy and Spanish club Rayo Vallecano.

He was in Malta last month where he oversaw a youth football training camp.

Hugo had surgery back in 2018 following a heart condition, and was believed to have been in good health having announced earlier this year that he intended to stand for elected office in Naples.

As well as Ascoli and Rayo Vallecano, Hugo also briefly played for Austrian club Rapid Vienna, and had playing spells in Venezuela, Uruguay, Japan and Canada.

Following Diego’s death last November, also of a cardiac arrest, Hugo had spoken out against the intense media scrutiny his family were suffering from.

“My other brother and sisters suffer because of all these people who go out and talk about Diego,” he said.

“We have always been with him and we have never seen these people. I hope there are no social networks in heaven and that Diego rests in peace.

“Our family wants justice, but so many people talk about what happened that they confuse the people who loved Diego.

“Everyone claims to have been his friends. Why weren’t they with him then? This is an amazing thing.

“Everyone who talks about him on TV makes me angry, but not his daughters. The others are just looking for six months of fame.

“I found out about Diego’s death from my daughter. When I went outside that day before I found out, everyone was looking at me strangely.

“When I got home, my daughter called me and said that her uncle had died. I don’t know how I got home then. My brother worked miracles on the field, he was an alien.”