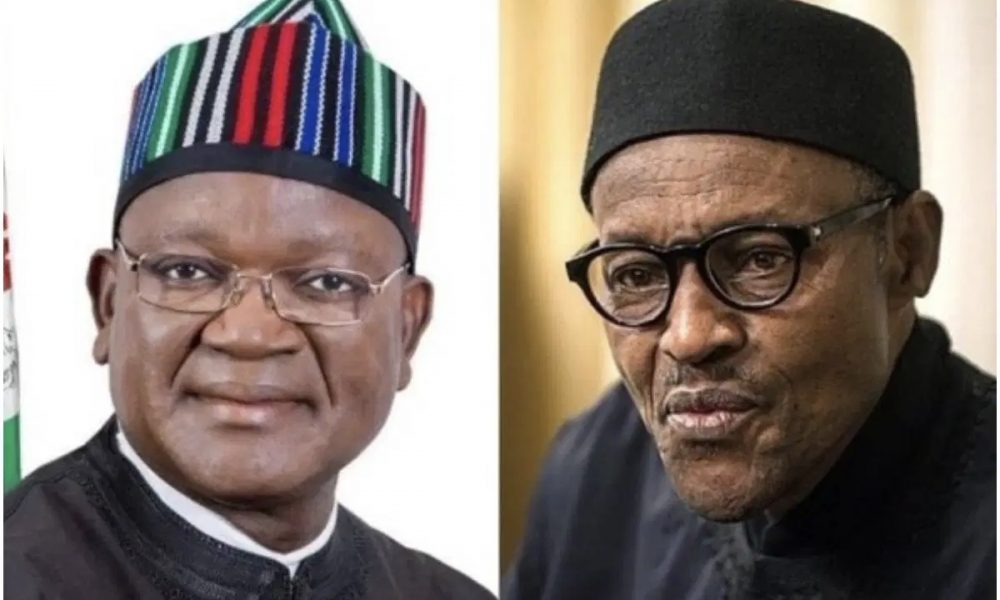 President Muhammadu Buhari has labeled Samuel Ortom, the governor of Benue state, a failure after he chastised President Buhari for the killing of some citizens in an IDP camp in the state on April 27.

This was claimed in a recent statement by the White House in response to Ortom’s outraged remarks about the killings in his state.

Ortom chastised President Muhammadu Buhari for the April 27 killing of some people in an IDP camp in the state, accusing him of “only working for Fulanis to take over the entire country.” In the last two weeks, no less than 70 people have been killed in three local governments in Benue State, according to the Governor.

Following his criticism, the White House issued a statement accusing him of only seeing other people’s problems and not his own.

Garba Shehu, the President’s Senior Special Assistant on Media and Publicity, said Buhari was saddened by the country’s killings as well as the governor’s charges, adding that “no responsible government takes pleasure in such events as the killing of military personnel and innocent civilians seeking shelter in an Internally Displaced Person’s camp.”

GOVERNOR ORTOM ONLY SEES THE PROBLEMS OF OTHERS, HE DOESN’T SEE HIS OWN

The President expresses his condolences to the families of our dear citizens who lost their loved ones in the recent spate of killings in Benue State.

Furthermore, he states that the rising levels of incidents, especially the killings and violence in various parts of the country call for further collaboration with security agencies to curb its recurrence.

He also states his disappointment and sadness to hear Samuel Ortom, the Governor of Benue State make a litany of accusations against his person and his government following the recent unfortunate incidents in the state.

No responsible government takes pleasure in such events as the killing of the military and that of innocent citizens taking refuge in an Internally Displaced People’s camp. President Buhari is deeply pained by the terrible acts of violence happening not only in Benue State but also in other parts of the country and expects that the law enforcement agencies will go to every possible extent to catch the perpetrators of these heinous acts and bring them to justice.

The lives of fellow citizens should not be desecrated by deploying them in political diatribe which unfortunately appeared to be the intent of the string of emotional attacks and blame laid at the doors of the President for those killings by Governor Ortom. President Buhari took an oath to defend the life and property of every citizen, a duty he takes seriously and is committed to ensuring.

Those citizens regardless of their affiliations, who either incite, sponsor or are proven to be abettors of these atrocities will face the law squarely and be answerable for their crimes against our fellow citizens and nation.

President Buhari continuously stresses that the strength of our country lies in our diversity in faith, culture, and traditions and attempts to sharpen the divide between northern and southern Nigeria, between Muslims and Christians, and between communities that have coexisted for centuries should be frowned upon and resisted. As Nigerians, we accuse colonial rulers of the policy of divide and rule. Today, it is our own leaders who put region against region, religion against religion, ethnic group against ethnic group and community against community.

The future of Benue State and indeed that of the entire country lies in harmony and respect for the law, order, and the constitution. It is the only way to achieve progress and development.

While the President will continue to keep security, police and the armed forces on their toes to be on top of their act in troubled parts of the country, the situation in the states will greatly be helped by everyone working together because that is the foundation on which progress and prosperity can be achieved.

Benue under the Ortom administration ought to cooperate with the Federal Government in the implementation of a number of national strategies programs in addressing underlying issues militating against peace, progress and development. This can still get done when the interest of the people is placed above all other interests. A government voted into office by the people, should treat the people as its masters and not as its servants.