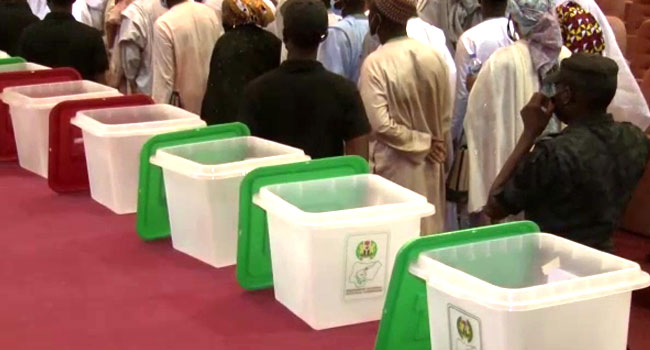 It is no longer news that the Kaduna North West Zonal congress of the Peoples Democratic Party, PDP, did not go as planned by organisers. Observers at the zonal congress to elect zonal officials for the party including the contentious position of the Vice National Chairman of the zone reportedly saw thugs wearing insignia of the Kwankwasiya movement, which is led by Senator Rabiu Musa Kwankwaso storm the venue of the congress breaking election materials, including ballot boxes and papers after the congress had started.

The violent show by the thugs caused the abrupt suspension of the process with delegates already accredited scampering to safety.

According to inside sources at the venue, the disruption of the congress moments after delegates had started voting was a last ditch effort by the Kwankwasiya movement to avert a looming thrashing at the zonal polls.

What is news though is the fact that the plan to disgrace the leader of the movement at the zonal poll was not hatched in Kaduna but in Kano many months ahead of the Kaduna poll.

Our correspondents in both Kaduna and Kano report that what was to have happened at the Kaduna zonal poll was finalised with the fractionalisation of the PDP in Kano state. Veteran Kano politician Aminu Wali emerged leader of the mainstream faction while Senator Kwankwaso held on to diminished cluster of what used to be a mass movement in Kano.

“Clearly, even before we left Kano for Kaduna we all knew that the candidate supported by the Aminu Wali faction will win the election. We have more than 80% of members of our party in our faction, so we knew what was going to happen” a source at the meeting loyal to the Wali faction told our correspondent after mayhem broke loose at the venue of the congress.

The source was referring to Senator Bello Hayatu, who was said to be favoured to win the election for the position of the National Vice Chairman against the candidate supported by the Kwankwasiya movement for the same position, Mohammed Jamiu.

Our sources affirmed it was to frustrate the emergence of Senator Hayatu and the imminent shaming of their leader that the Kwankwasiya thugs invaded the congress venue unleashing terror on the process and delegates.

Meanwhile Senator Kwankwaso has not addressed the issue of the invasion of the congress by thugs identified to be in his faction, as at press time but he has been reported to have accused some politicians outside Kano State of causing crises within the party in the state.

A source in Kano described the allegation as cheap and false. “He (Kwankwaso) is just looking for what to blame his fading political influence on” adding “what is happening now in the party is his fault. He did not listen to calls to democratize the party and allow new interests to be represented in the party”

According to this source, “in the past Kwankwaso had boasted repeatedly that no politician from outside of Kano can dictate what happens in the party in Kano, so what is he saying now?”

Many PDP members at the botched congress in Kaduna viewed the display by the political thugs fingered as Kwankwasiya elements as the last gasp of a waning political godfather.

“At the 2019 Port Harcourt presidential primary election, Kwankwaso came a disappointing fourth”, a PDP delegate said, “that was way below his profile. It became obvious that the man was all along being over billed”

Many PDP members are now wondering how the Kwankwasiya group, “who pride themselves for violence, were terrorised into losing the 2019 governorship election in their home state Kano”