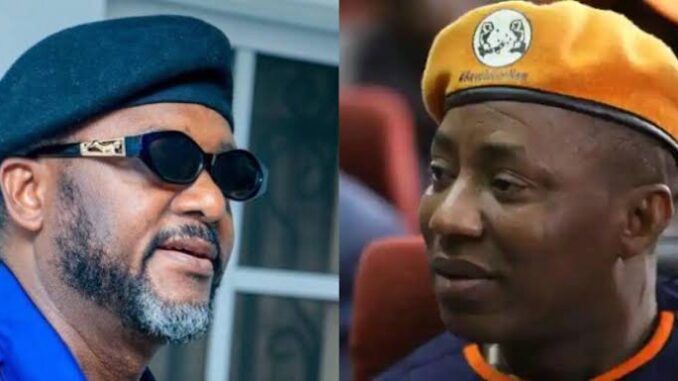 The Deputy Governor of Kogi State, Edward Onoja, and the publisher of Sahara Reporters, Omoyele Sowore, have engaged themselves in dirty fight on social media.

The duo attacked themselves after Onoja shared photos of his daughter’s university matriculation on Twitter.

“Congratulations Oma Daddy on your matriculation. God grant you speed and excellence,” the deputy governor captioned the photos.

In reaction to this, Sowore congratulated Onoja’s daughter on her matriculation and also said some prayers for her.

The #FreeKogi2 hashtag used in Sowore’s post is a campaign on social media that alleges that Governor Yahaya Bello of Kogi State and his Deputy Onoja “humiliated and arbitrarily jailed” two activists “for freely expressing their rights to dissent against @MBuhari’s tyranny.”

Not satisfied with Sowore’s reaction, Onoja responded by sharing his own prayer for the RevolutionNow convener.

He tweeted, “Dear Sowore, I thought families, especially, the children are out of bounds in political brickbats? Abi, your school of thoughtlessness does not teach sense and sensibility?

“Anyway, I too have a prayer for you… I pray that you are Nigerian and patriotic enough to stay at home, establish and have your family here in Nigeria, just like I have done. It will teach you to truly work for the improvement of the country for their sakes.

“I pray you are man enough to hustle with your mates, working to assume leadership of the nation by paying your dues, and not trying to jump in through the window like a palliative thief. It will teach you that your contemporaries at home are not indolent layabouts looking for a saviour from abroad to whom they will hand over govt once he wears an orange beret and yells ‘revolution’ or ‘Buhari Must Go.

“I pray for you that you will truly come to love this great country and her people with a mindset to sacrifice for her and not to sacrifice her to your lust for power.

“It will stop you from trying to set fire to your own father’s house simply because you have a mat in your rich uncle’s BQ who has induced you with peanuts in the name of activism so he can claim the land once the house is destroyed.

“I pray you have the balls to learn from some of us and begin your leadership quest from your state.
“You will finally learn Leadership 101, not #gbasgbos and chewing gum activism. I recommend you start as a councillor in your ward, if you know your ward.

“I pray you grow out of your desire to seek attention and play to the gallery.

“Leadership and governance is not a circus, you know and a dancing monkey can only grab attention for only so long.
“I pray you redeem your already lost image amongst genuine freedom fighters.

“Shebi you know say dem no send you again?.
“I pray my daughter won’t need to defend you pro bono when you are 70, still wearing a beret, sagging trousers and still unable to distinguish between lawful and unlawful protest. Shebi you see the travails of your types wey invade US Congress in the name of revolution?

“Sowore, this is brother to brother, comrade to comrade, Aluta to Aluta… guy e get wetin person dey grow pass. Leave this lane and get serious if you really want to do politics. You don old pass this thing.

“Another brotherly advice: Find another target. Kogi is getting on very well and fine. This your contract don cut. Those who gave you this job, tell them say we be street pass you. E no get where you fit take your madness pass. We go cure am for you.

“I pray this sinks and leads you on the path to being a better man. Thus far. you are way below the bar of a patriotic citizen.”