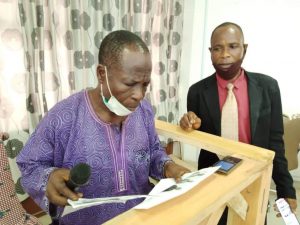 #EndSARS: How I suffered a decline in memory since police brutalised me three years ago – Victim

Mr Kolawole told the Osun State Judicial Panel of Inquiry set up to look at cases of Police Brutality, Human Rights Violations and Extra-Judicial Killings, on Thursday that the officer, Superintendent Ayuba, attacked him in Osogbo, the state capital.

He said beyond beating him to pulp, the officer also defrauded him of his car which was taken to an unknown destination.

Mr Kolawole said following the beating, he has been spending N15,000 monthly to precure medication for his internal injuries.

“It is unfortunate that I have turned to what I am today. As you can see, I have been suffering from memory loss due to the incident of police brutality which I was a victim of.

“What actually happened was that I was in my house that fateful day when I saw about five fully-armed police officers who had come to arrest me. I was beaten mercilessly and forced into the vehicle.

“I was hit repeatedly on the head with different harmful weapons they took along and I was taken to Ilesa.

“The injuries I sustained particularly on the head have been disturbing me till now to the extent that hardly I remember past occurrences. The ugly incident had caused a lot of damage to the extent that I spent N15,000 every month to buy drugs,” he narrated.

Mr Kolawole is, however, demanding a sum of N7 million compensation to assuage the adverse effects of the incident

In his ruling, the chairman of the Panel, Akin Oladimeji, a retired judge adjourned the case to tomorrow March 26, 2021, for further hearing.