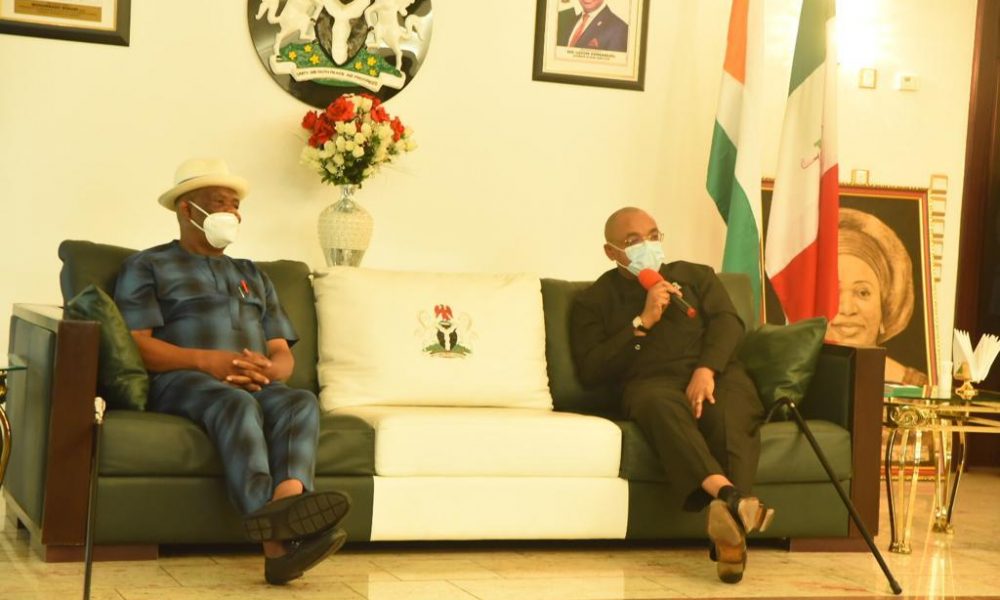 …the secret of my relationship between Gov. Emmanuel & I – Gov. Wike

Rivers State Governor, Nyesom Wike has commiserated with the governor of Akwa Ibom State, Mr. Udom Emmanuel over the recent loss of prominent indigenes of the state.

Wike described the death of the State Chairman of the People’s Democratic Party, PDP, Mr. Udo Ekpenyong and the Director General of Governor Emmanuel’s two terms Divine Mandate organization and Chairman of Pan Niger Delta Forum, PANDEF, Air Commodore Idongesit Nkanga rtd., as a grave loss not just to Akwa Ibom State but the entire South-South region and the party which, he said, is Nigeria’s hope.

The Rivers State Governor who was on a condolence visit to Governor Emmanuel at Hilltop Mansion, Government House Uyo, on Thursday said what touches Akwa Ibom touches Rivers state.

Hear him, “what I came here is that the Governor Udom has lost two three prominent sons of Akwa Ibom State, the most painful is the former two times Director-General of his campaign organisation and the Chairman of PANDEF and then his party Chairman which is also my party and the hope for this country is PDP, I said no what affects him, affects me, what touches Akwa Ibom touches Rivers state”. He stated.

According to Wike, Idongesit Nkanga’s death was unfortunate, untimely and a sad event for both the people of Akwa Ibom and Rivers states, explaining that the loss is happening in a time when he had become a strong voice in the Niger-Delta and was at the frontline of agitations for the restructuring of Nigeria.

He however encouraged Governor Emmanuel to draw consolation from the word of God and hold onto his faith as a Christian, adding that only God is all-knowing and cannot be questioned by man over what he has allowed, while assuring that he and the Rivers State Government will be fully involved in all levels of the funeral arrangements for the two.

On the premium he places on his relationship with the Akwa Ibom governor, Wike said Udom Emmanuel has earned his respect and the love of his people by his integrity in keeping his promises to his people and his political associates was endearing and exemplary. He described Governor Emmanuel’s developmental strides as impressive while also describing the governor, as a man who loves his people.

“Governor Udom Emmanuel is my brother, he is a man of his words, if he tells you that he will do something you can go home and sleep with your two eyes closed, again Governor Udom Emmanuel has the interest of the people of the Niger Delta at heart particularly the people of Akwa Ibom State as we were coming in today, I told the Chief of Staff that Akwa Ibom is competing with Rivers State with what I have seen it is unbelievable”.

Responding, Governor Udom Emmanuel, thanked Governor Wike and other state governors in the Niger Delta region for identifying with him in the period of grief, describing his relationship with Wike as what he values beyond their tenures in office.

He described the departed two-time DG of his governorship campaign organisation, Idongesit Nkanga and the State PDP Chairman as men of proven integrity and loyalty, adding that the news of Nkanga’s death, in the peak of the yuletide, threw the state into an unimaginable grief.

In his words, “For a man to be your two term DG, he must have proven a high level of loyalty and integrity. If Idongesit Nkanga says he loves you in front, know that he loves you all round, both in front and behind you. He was a man of that kind of integrity, character and personality. You could see, even in the South-south, he never had any wall of discrimination”.

“My party Chairman also, in fact when they are introducing him, they call him Mr. Loyalty. He was that loyal. He has served the party both at the state and the national levels. In short, if you want any definition for loyal, just look for Hon. Udo Ekpenyong, you’ll certainly get that anytime any day. It’s so painful”, Emmanuel said.

The Akwa Ibom Governor also bemoaned that the state, within the period has lost a former Chief of Air Staff, Air Marshal Nsikak Eduok and former Commissioner for lands in the state Executive Council, Architect Ime Ekpo, adding that the state is pained that four of her very good people are to be buried within the same period.

He however accepted to be consoled with the fact that every man has a set time by God to quit the earth, despite the pain, and restated his resolve to continue to provide leadership for the people of the state, with the hope that God will give the state beauty for ashes.

Governor Emmanuel therefore called on all governors, leaders and stakeholders of the Niger Delta region to join him and the people of Akwa Ibom State for the funeral ceremony in honour of the PANDEF Chairman, scheduled for February 6, 2021.