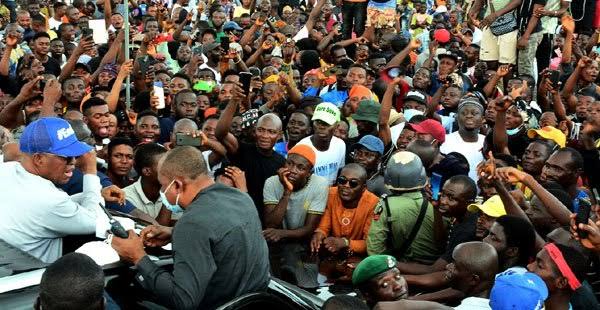 Traditional rulers in the State of Osun have condemned in strong terms the assassination attempt on the State Governor, Adegboyega Oyetola, on Saturday by armed thugs.

They made the condemnation during their solidarity visit to the governor.

The Aragbiji of Iragbiji, Oba Abdul-Rasheed Ayotunde Olabomi, Orangun of Ila, Oba Wahab Oyedotun, Orangun of Oke-Ila,  Oba Adedokun Abolarinwa and other traditional rulers  from the Ila Orangun axis were among the  early callers at the Government House on Tuesday, to sympathise with the governor over the attack.

Specifically, Oba Olabomi also berated the protesting youths who took the advantage of the meek nature of Governor Oyetola to unleash mayhem on him and his entourage.

The traditional rulers warned the youths who have been protesting against police brutality and the need for the Federal Government to disband the Special Anti-Robbery Squad (SARS) to be wary of being derailed from the cause of the protest to end SARS in the country.

While expressing  their support to the yearnings and aspirations of the protesting youths, they said it was uncalled for to turn peaceful protest to violent attack on any citizen, not to talk of a sitting Governor.

Oba Olabomi who was also accompanied by some of his chiefs, saluted Governor Oyetola for displaying high sense of maturity, calmness and tolerance in the face of provocation and rudeness exhibited by the protesters.

The monarch further said : “We salute the maturity, the calmness and the patience exhibited by the Governor in the face of the Commando style of the attack and provocation by the invading hoodlums who took advantage of the Governor’s meek nature.

“We identify with genuine protesters for an end to brutality and abuse, extortion and corruption by Police who are paid to protect lives and property of the citizens.

“We condemn all forms of violence and abuse.

“However, it is observed that an uncoordinated protest will always give room for hoodlums and violent disposition which is worse than the perceived police brutality which we all condemn.

“The display of hooliganism before the Governor by the pseudo protesters is a clear testimony to the fact that the EndSARS protest in Osun has been hijacked just as the protesters have been infiltrated by miscreants.

“To give credence to this claim, how can one explain an unprovoked attack on the number one citizen of the state, looting of the Osun Mall, smoking of weed openly, brandishing of weapons by hoodlums at protest grounds among other criminalities under the pretest of protest?

“I however call on the Federal Government to promptly address the issues raised by the protesting youths just as I urge the youths to leave the streets once their demands are being addressed.

“Much as we condemn the assassination attempt on the Governor, so also, we want the perpetrators of the dastardly act to be properly investigated and prosecuted.

“We pray for peace and tranquility in our State so that the current wheel of progress and development can be sustained.”

In his response, Governor Oyetola thanked the traditional rulers and their entourage for the show of love and solidarity, a move he described as timely and prompt.

He reiterated his administration’s resolve to ensure the general welfare and well-being of the citizens, saying he would not be distracted by the incident in his determination to take the State to greater heights.