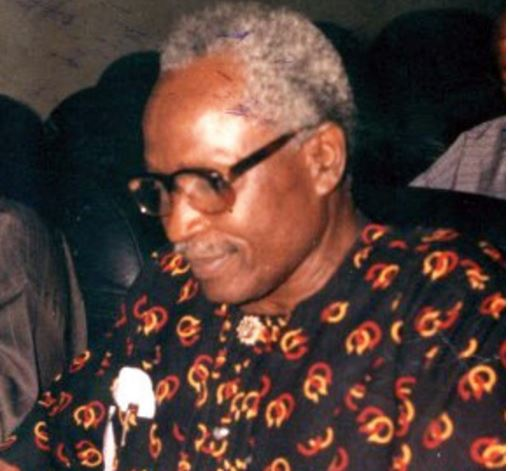 Peppersoup, and The Road to Ibadan. Ibadan, Onibonoje Press, 1977.

(1991) I like to think of myself as a painter or composer using words in the place of pictures and musical symbols. I consider commitment in fiction a prostitution of literature. The novelist should depict life as he sees it without consciously attempting to persuade the reader to take a particular viewpoint. Propaganda should be left to journalists.

In my ideal novel the reader should feel a sense of aesthetic satisfaction that he cannot quite explain—the same feeling he gets when he listens to a beautiful symphony. For those readers who insist on being taught, there are always things to learn from a faithful portrayal of life in a well-written novel.

From his first appearance as a novelist, with The Concubine in 1966, Elechi Amadi established himself as a unique figure in African fiction. He was not alone in attempting to convey the day-to-day texture of traditional, pre-colonial life in an African village: Chinua Achebe's Things Fall Apart had already done this, at least to an extent. But he distinguished himself by not offering any explicit contrasts between that traditional world and the one that replaced it. Whereas Things Fall Apart and many other African novels are concerned, in part at least, with the coming of the white man and the effect of that event, Amadi's novels have never emphasized alien influences at all. The action of any of his three novels could have taken place either five years or a century before the colonial intrusion upon the area. Likewise the dilemmas that confront and finally destroy his heroes or heroines derive entirely from the beliefs, practices, and events of their indigenous culture.

The Concubine was followed by The Great Ponds and The Slave. Although not thematically related, all three novels take place in what is recognizably the same Ikweore environment. The action of all three appears to turn upon the working out of a fate that falls on the characters from outside; yet it would be meaningless, in the eyes of this traditional and god-fearing community, to call such a fate unjust. Iheoma, heroine of The Concubine, is powerless to avert her spiritual marriage to the sea-king, a union that prevents her having any successful human relationships. Her attraction thus becomes a fatal one, resulting in the deaths of all those who seek to free her from her condition. Likewise, the hero of The Slave leaves the shrine of Amadioha to which his late father was bound as an osu (cult-slave), and appears to have right on his side in arguing for his emancipation, since he was not actually conceived there. Nevertheless, his brief career in freedom has an obstinately circular form, curving through initial success to a series of disasters that bring him, friendless and alone, back to the shrine he had so hopefully deserted.

Amadi has maintained a nicely judged ambiguity about the meaning of these events, leaving the reader to determine that meaning instead. The society of which he writes would have rejected—and perhaps still rejects—any clear distinction between the natural and spiritual orders of existence. These interpenetrate to such an extent that man cannot demand the mastery of his fate through will alone. The highest he can aspire to is to know his fate and tune his soul to its acceptance. Tragedy springs as much from failure to do this, as from the nature of that fate itself.