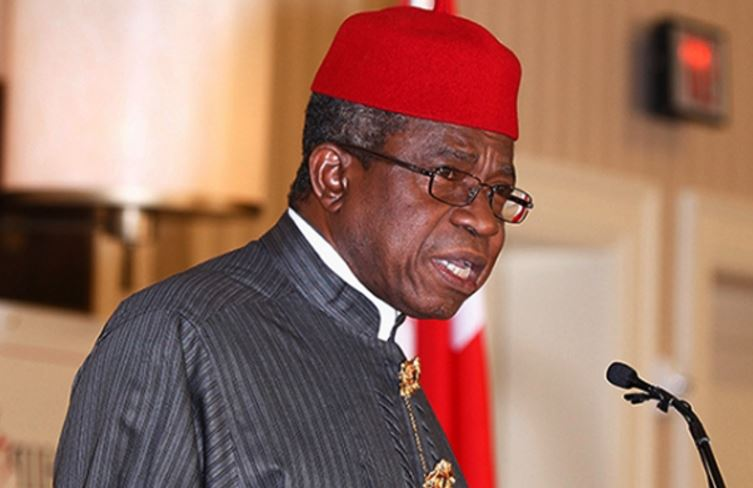 He is happily married to Mrs. Ucha Maduekwe (Ojo Maduekwe wife) with grown up children blessed in various fields of endeavors.

RECORD OF PREVIOUS CFR (COMMANDER OF THE FEDERAL

PROFESSIONAL AND OTHER AFFILIATIONS

Raised N70 million naira for a Community Trust Fund in Ohafia which money has tremendously uplifted the development profile of the community through secondary school rehabilitation, civic centre construction, and skill acquisition centre development, in addition to scores of jobs creation and employment.

44th Independence Anniversary Guest Speaker
Was the first Cabinet Minister to design and create an Anti-Corruption Unit as Transport Minister 2000-2003, 3 units which became the model for other Ministries and Government Agencies.
As transport Minister, began and concluded the First Railway Master plan for Nigeria to span over a period of 25 years.
Directed, the First Master plan for Integrated Transportation Infrastructure for Nigeria (MFII) spanning over a period of 25 years.
Took Nigeria back to International Maritime Organization (IMO) Governing Council
Beat all wide to ensure Nigeria made the IMO WHITE LIST without which the entire Maritime Sector would have grounded.
Cleaned out the ports of Wharf rats and sanitized the Ports Sector (usually a violent sector) so well that industrial unrest there has become a thing of the past
Produced in 2000 a new Transport policy for Nigeria
Initiated and got Federal Government to establish six Inland Container Depots (ICDS)
Partnered with National Assembly to get the historic Cabotage Act passed which was aimed at encouraging indigenous participation in global shipping businesses.
Partnered with Bureau for Privatization to jumpstart the privatization of the Transport Sector, especially Port concessioning and modernization of port services to conform with International standards.
Revitalization of equipment and facilities which greatly decongested the ports to meet the 48 hours cargo clearance.
Improvement of pilotage services through the rehabilitation of Nigerian Port Authority, non-functional craft vessels, pilot cutlers, and tugboats.
Dredging and clearance activities in ports, channels, and approaches to the ports and harbours including waterways, in order to make them navigable year round.
Rehabilitation and construction of jetties.
Initiating and hosting the first African Ministerial Forum on Integrated Transportation (AMFIT), this resolved to institutionalize the forum as the Transport arms of NEPAD (New Partnership for African Development).
New Railway Lines
Restructuring of Nigerian Railway Corporation
Final Resolution of Nigerian railway Pension Scheme Problem
Introduction of Rail Mass Transit (Kano-Nguru-Kano route) and Lagos-Alagbado-Lagos route) on an hourly basis
Aggressive capacity building in the Transport Sector through agencies as Nigerian Institute of Transport Technology (NITT), Zaria, and the Maritime Academy of Nigeria MAN) Orun.

STILL AT FEDERAL GOVERNMENT LEVEL – A CAREER AS CULTURE AND TROURISM MINISTER 1999-2000, RECORDED SOME OF THE FOLLOWINGS

The 1999 Second protocol on the Protection of Cultural Property in Armed Conflicts.
The United Nations Educational Scientific and Cultural Organization (UNESCO) Convention on the Protection of Underwater Cultural Heritage.
The UNESCO Convention on Safeguarding of Intangible Cultural Heritage
This Act underpins the brave intents of the Obasanjo Administration to preserve, promote, celebrate and improve the nation’s cultural and artistic values.
The Government during Ojo Maduekwe’s duty post as Culture Minister expedited action towards repatriating works of arts originating from Nigeria from overseas with a view to reconstructing the country’s lost cultural values.
The establishment of the National Council on Culture and Tourism, which was inaugurated in may, 2000.
The Ministry in through its parastatals participated in several exhibitions locally and internationally, providing opportunity to showcase our rich cultural heritage.
The Ministry in conjunction with the Embassy of Democratic Peoples Republic of Korea, held a comprehensive exhibition of books photographs, arts and crafts Abuja in September, 1999.
Fashion exhibition of the Pan African Historical Theatre festival (PANAFEST 1999). The Festival took place in Ghana from 30 July, 8 August 1999 and was led by the Honourable Minister of Culture and Tourism, chief Ojo Maduekwe who presented a seminal paper titled – Moving Africa Beyond Song and Dance from Entertainment to Empowerment.
Nigeria participated in the 30th Session of the General Conference of UNESCO held between 26th October-7th November, 1999, at UNESCO Headquarters, Paris.
The Ministry was a member of the Planning Committee for Hanover Expo 2000 which took in Germany. Expo 2000 aimed at offering all nations the opportunity to show to the world how they have grappled with challenges posed by problems of global system and scientific development. The ultimate goal for organizing the event was for all to achieve some level of sustainable development through Culture, Science and Technology;
The Ministry under the Honourable Minister led a delegation to the 23rd Session of UNESCO World Heritage Committee in Marakesh, Morocco, where Sukur Landscape in Adamawa State was officially included in the World Heritage list;
The Ministry also prepared inputs and participated in the National Summit on African at Washington DC from 16th-20th February, 2000;
The Ministry organized an exhibition of drawing, printing, paintings, sculptures, textiles and crafts for the 2nd Nigeria-China Art and International Exhibition in Lagos from October 25 to 29, 1999. It was aimed at bringing the government, corporate bodies and individuals in Nigeria and China together to build friendship and cooperation in all fields of human endeavour;
The Ministry, along with fifty-two other countries from all over the world, celebrated the Festival of the Judges Theatre De Gaitage in Tunis from November 17 to 21, 1999. Yemoja, Nigeria’s representative at the Festival was highly praised by a large audience in Tunis.
The Ministry prepared a 54 man contingent along with 31 other countries
that participated in the African International Lightening Carnival held at
the Archaeological Theatre in Sabratho (A world Heritage Site) in Libya.
The Carnival took place from September 5, to 14, 1999 and was used to
the 30th Anniversary of Col. Muammar Gaddafi assumption of power;
The Ministry stressfully co-hosted the Iranian Film Week from the 2nd to the 8th of February, 2000. It also launched and inaugurated the Culture of Peace by the President. The Ministry in collaboration with UNESCO organized a Conference On Inter-Religion issues and ethnicity;
The Ministry organized and celebrated the 1999 WORLD Tourism Day on September 27th, 1999. The event sought to create necessary awareness of the role of tourism in the economics of member-states in terms of job creation, foreign exchange earning, rural-urban integration and promoting mutual understanding among the peoples of the world.
The Ministry through its parastatals participated in major trouism fairs and exhibitions such as
(a) London-Travel Market, London, United Kingdom
(b) International tourism Base (TIB), Berlin Germany

Artifacts were exhibited for the World Youth Soccer Championship tagged – Nigeria 99 at Enugu, Ibadan, Lagos, Kaduna, Calabar, Port-Harcourt and Kano Museums;
They Ministry through the National Troupe attended the World Song Festivals in China. Nigeria was first and only African country to be invited for the World Festival of Songs and was awarded the Vase of Honour and Merit in 1999.
The Ministry in collaboration with its parastatals and international agencies worked on in the enforcement of copyright Laws to protect and guarantee creation and production of these works of art from being exploited.
The Ministry also participated in the Summit in Malta and London, and the Black Heritage Festival in Badagry which was co-hosted with Lagos state Government and 26 Afro-American and Caribbean Majors were in attendance.
The Ministry in collaboration with its parastatals participated in the Osun Ogbogbo Festival;
The Ministry signed protocol agreements and memoranda of understanding (Culture and Educational Cooperation) on behalf of Nigeria with the following friendly countries/international organizations:-
i) Germany in December, 1999
ii) Jamaica in 1999
iii) Venezuela in July, 1999

Rehabilitation of Tourism attractions. Complete fencing of Mary Slessor’s tomb Site, Calabar, Cross River;
Completion of the First phase Museum of United in Enugu and Ibadan;
Renovation works on the National War Museum, Umuahia, and the old Katsina Teacher’s College in the months of April and May 2000;
The Zoological Garden in Jos where endangered species of birds and animals were kept was fenced
Commissioning of Aina Ultra Modern Studios, Lagos, on 23rd September, 1999. The studio provides works space for sculptors partners ceramists and textile designers
The main Gallery of Modern Art, Lagos was re-organized in 1999. New paintings, sculptures, ceremics and graphic works were introduced. Many of the exhibitions housing the art works of the masters were completely re-arranged and beefed up with a number of newly acquired monumental works;
The construction of the office Block of Gallery of Modern Art at Umuahia, commenced in 1999.
The Ministry resuscitated the publication of Nigeria magazine, which went into oblivion for some years. A special edition and a tribute to late Dr. Garba Asiwaju, a former Director of Culture and Editor of the Magazine were launched in 2003.
The construction of the office Block of Gallery of Modern art at Umuahia commenced in 1999 .
Chief Ojo Maduekwe was National Secretary of the ruling political party, the Peoples Democratic Party (PDP). He worked as the deputy director of PDP presidential campaign 2011 Goodluck/Sambo ticket.