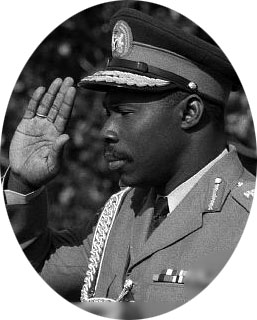 General Olusegun Obasanjo was born in Ogun State, in March 1937. Trained in Nigeria, India, Britain and the United States

It was to Obasanjo as that Division's Commander that Biafran Army surrendered to the Federal side to end the war in January 1970. He succeeded the assassinated General Murtala Muhammed as Head of State in 1976. Three years after, in 1979 General Obasanjo wrote his name in gold by handing over power to Nigeria's first democratically elected Executive President, Alhaji Shehu Shagan.

After retirement, General Obasanjo became the co-chairman of the Commonwealth Eminent Persons Group on South Africa.

He founded in 1988, the African Leadership Forum based in his Otta farm, near Lagos, was a successful poultry farmer and author of many publications including "Africa Embattled" 1988 and "My Command" 1979, an account of the Nigerian Civil War.