933-Nigerian militarism and the Chilcot Report

Nigerian militarism and the Chilcot Report 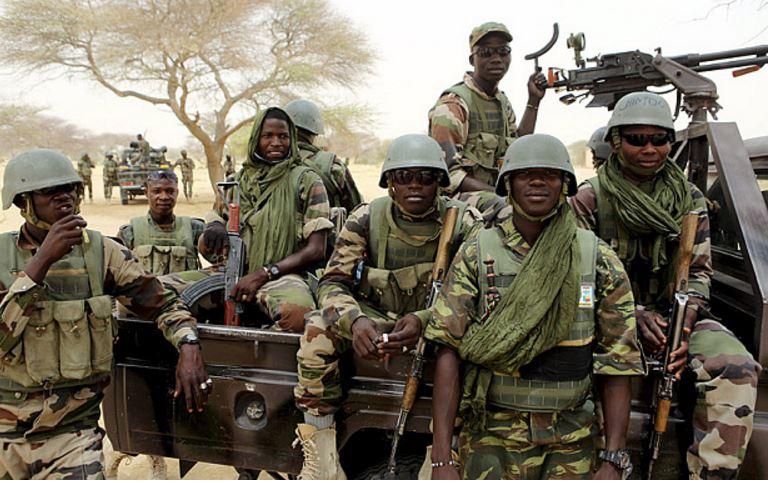 Last week, the Chilcot Inquiry—the British public inquiry into the nature and causes of UK’s involvement in the Iraqi war—published its report. Generally, the report concluded that there was no satisfactory legal basis for the invasion of Iraq. Military action commenced before exhausting peaceful options; military action at the time was not a last resort even if it might have been necessary later; and government policy at the time was based on flawed intelligence.

The Iraqi War and the Chilcot Report have little or no significance to Nigeria’s domestic and foreign policy. Still, there are broad and specific lessons to be drawn from this episode of British politics. Some of these lessons may seem self-evident to any discerning person but, as a keen observer of Nigerian politics and government, I have long come to the conclusion that political lessons are rarely self-evident to our leaders.

Nigeria is a country still governed using the primal tools of force and power. Those with power utilise human and other resources for the benefit of a few. As Lagos’ recent ban on hawkers shows, the majority of citizens practically exist to serve the agenda of the political class. It is not unusual to hear government officials describe citizens as “stubborn”, “disgraceful” and similar contemptuous adjectives. This, of course, is the autocratic residue of our colonial and military heritage.

Yet, no individual—no matter how powerful—governs forever. This is the broad lesson from the Chilcot Report. That, ultimately, history serves as a final judge over all individuals. Those vested with power over the lives and liberty of others will be confronted by the criticism of history. To pass the moral judgment of history, political actions have to be situated in the context of universal space and time.

Thus, history rarely forgives political acts that are based on narrow, parochial and self-serving circumstances. And, it is immaterial that those circumstances seemed justified to the individuals involved. History favours the broad interests of all humanity, not just in the present, but also across all time.

And so, for the Iraqi War, British and American interests judged—and convicted—Saddam Hussein. Arguably, this judgment was deserved: Saddam was a brutal dictator. Still, its conduct was flawed: action was undertaken to serve the limited interests. History, therefore, will be unforgiving. Decisions that seemed so pertinent at the time of implementation will amount to waste.

It is trite that Nigerian leaders, from Frederick Lugard to Muhammadu Buhari, have hardly been judged by history. This deficiency is partly due to the ignorance (and a painful absence of political self-awareness) of the majority of the population. It is also due, partly, to the fact that the world has not had much cause for examining our local policies. But, our rulers cannot continue to count on these factors. Judgment awaits with the continuing evolution of the Information Age.

But, on less philosophical and more practical issues, the Chilcot Report is a lesson in the use and abuse of military intervention. The international community is increasingly averse to military intervention as a first resort. Brute force policymaking is being discouraged. The world will only celebrate just wars. Force is a necessity only where there is imminent threat to the life of others. Hence, the post-colonial approach of using the military to enforce policies has to be checked.

Yet, the Nigerian Constitution is clear on the legal aspects of military intervention. Section 217(2) of the Constitution summaries the functions of the armed forces as: (a) defending Nigeria from external aggression; (b) maintaining Nigeria’s territorial integrity/securing its borders from violation on land, sea, or air; and (c) suppressing insurrection and acting in aid of civil authorities to restore order “when called upon to do so by the President, but subject to such conditions as may be prescribed by an Act of the National Assembly.”

And so, Nigerians who urge President Buhari, for example, to launch sweeping military offensives in the Niger Delta are clearly urging criminal warfare. Terrorism ought to be tackled through intelligence-based operations not genocide. Someday, the legality of these military actions—and the liability of their proponents—will be examined and judged.

For now, Africans have to abandon ideological relics of colonialism and dictatorship. The modern world frowns on a command-line, do-or-die approach to governance. Instead, governance today requires creative solutions to socioeconomic issues. A government that puts forward a battering-ram proposition is fit only for mediaeval times.

We cannot call ourselves a country until public policy is based on popular participation, rather than the shadow of brute force. This is what President Buhari—and every Nigerian public official can learn from the Chilcot Report. Socio-political creativity, democratic inclusivity and a genuine understanding of the will of the people are more important to modern leadership than mobilising a standing army. This is not easy. It requires that we put forward and elect our smartest and kindest, not our most belligerent. Anyone with a gun can issue orders, but not everyone can lead others persuasively. And, here is the sum of the matter: Nigeria is an easy country to rule, but a very difficult country to govern.