931-Sallah homage and the sinners in President Buhari's cabinet

Sallah homage and the sinners in President Buhari's cabinet 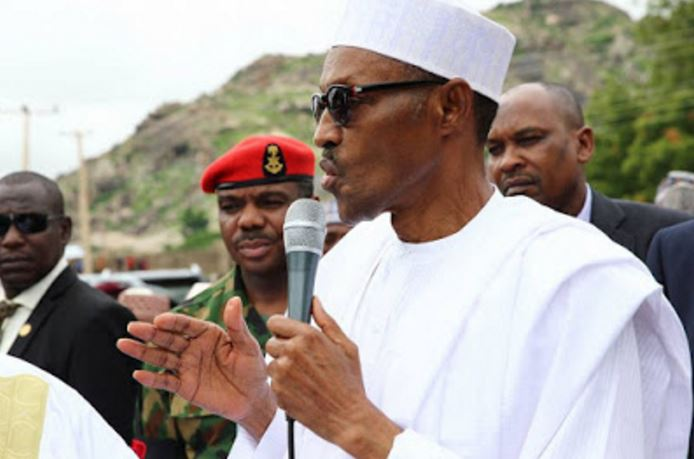 Vice-President Yemi Osinbajo and the Minister of the Federal Capital Territory, Muhammed Bello, on Wednesday led those they described as residents of the FCT to pay Sallah homage to President Muhammadu Buhari inside his official residence at the Villa. Although they did not disclose the criteria used to select members of the delegation that included Muslims and Christians, the privileged few were in the President’s sitting room to felicitate with him for being among the living that saw the end of the Ramadan fast despite his ill-health at the beginning.

As expected, the brief reception started with both Muslim and Christian prayers. The event was not about goodwill messages, eating and drinking alone. There were enough jokes to spice up the morning.

Osinbajo set the ball rolling when he said he observed that Buhari had lost a lot of weight apparently due to the 30-day fasting that he had just concluded. He expressed the belief that with the fasting period over, the President would start gaining weight and have more strength to tackle the nation’s challenges. All those present roared in laughter.

Not done, the Vice-President observed that Ramadan period was a time to show love and forgive others. He then went ahead to identify two top government officials who are sinners in dire need of forgiveness. He listed the affected officials as the Secretary to the Government of the Federation, Mr. Babachir Lawal; and the Minister of Information and Culture, Alhaji Lai Mohammed. Both of them were present at the event.

The Vice-President did not disclose their sins neither did he say whether the government officials sinned against the President or Nigerians. All those who were present however seemed to get the joke as they again roared in laughter. I guess their sins have to do with the controversial statements always credited to them in the media. Lawal has been rolling out such statements lately.

Then the pastor in Osinbajo took over. He suddenly forgot that the gathering was more for Eid-el-Fitri, a Muslim festival as he started making what Christians will refer to as prophetic declaration as if he was on the pulpit in a parish of The Redeemed Christian Church of God where he is a pastor.

He turned the second part of Deuteronomy 33:25 “as your days are, so shall your strength be” to prayer points for the President. He said as Buhari who is approaching 74 grows older, he will be stronger and he will gather more strength to be victorious despite the challenges facing the nation. A loud “amen” enveloped the sitting room in a manner that one would think one was in a church.

Those who had been spreading the news of alleged closure of the Aso Villa Chapel were surprised when the chaplain, Pastor Sheyi Malomo, approached the President to present Sallah gifts on behalf of the chapel. I do not know whether Osinbajo contributed to the choice of the gift bought for the President but Malomo’s explanation gave such indication. The pastor presented a greeting card and a giant mirror. Why a mirror? He said as the Vice-President rightly pointed out, Buhari had lost weight and that he would need a mirror to be seeing himself by the time he is gaining back the weight. He did not say whether he did a research and discovered that there was no mirror inside the President’s residence.

Many people expected the President to give it back to Osinbajo and Malomo during his brief speech, especially as it concerns his alleged loss of weight. Buhari however agreed with the two of them that he had indeed lost weight. He promised to make efforts in order to gain some weight so that by the time his guests visit him again next year, they would see the difference.

The President’s speech was also laced with jokes. At a point, he said he observed that those who spoke before him did not recognise the Governor of Central Bank of Nigeria, Godwin Emefiele, in their protocol lists. Emefiele who is known for always wearing suits was decked in babariga and a cap in solidarity with Muslims. The President insinuated that his style of dressing made it difficult for people to recognise him. “You better stand up now so that they can recognise you,” he said.

Buhari cracked another joke when he said some of his officials are not always recognised because they work behind the scene. He said he was going to introduce one of them because of when they come knocking at the people’s doors. Behold, he introduced the acting Chairman of the Economic and Financial Crimes Commission, Ibrahim Magu! Those who do not pray for a visit by EFCC officials murmured.

The President also got ribs cracking when he was explaining why he believes that more people listen to radio than they watch television or read newspapers. He said not everybody could buy newspapers while some who could afford it cannot read. He talked about how epileptic power supply in the country had made it difficult for those who want to watch television to do so. The President said but radio was readily available because, “Even people who cannot afford radio can go into a barber’s shop or a drinking parlour. They will sit down, listen to the radio programme and then continue their journey.” The sitting room again erupted in laughter.

When the President turns emergency steward

The President had, since his return from his vacation on June 19, been hosting different groups to the breaking of Ramadan fast called Iftar inside the Villa. On Monday, he had the last one in the series. It was unique in many ways.

First, unlike the previous ones that featured the big men and women in the country, the Monday’s Iftar was for the downtrodden, many of who may not afford to buy such food for themselves. The President’s guests included Internally Displaced Persons, taxi drivers, commercial motorcycle riders, the physically challenged as well as artisans such as butchers, hairdressers, barbers and tailors.

Also invited were members of the Buhari Support Organisation, the President’s neighbours in Lobito Crescent and some junior workers in the headquarters of the All Progressives Congress among others.

Another unique thing was the decision of the President to turn to an emergency steward at the event. He personally served some of the physically challenged before he returned to his seat to break his own fast.

Joy was visibly written on the faces of many of the guests who never dreamt of coming close to the seat of power, not to talk of eating under the same roof with the President or he personally serving them.

Their joy and appreciation were expressed by two IDPs, Musa Abdullahi from Gwoza, Borno State and Joseph Jauro from Madagali, Adamawa State who said Muslim and Christian prayers at the event. Musbau Diti who gave the vote of thanks also expressed their happiness for being part of the Iftar.

For these people, their prayers would have been that Ramadan fast continues throughout the year to increase their chances of dining with those in power. Enjoy your weekend.