930-Political or economic malpractice: Which is worse?

Political or economic malpractice: Which is worse? 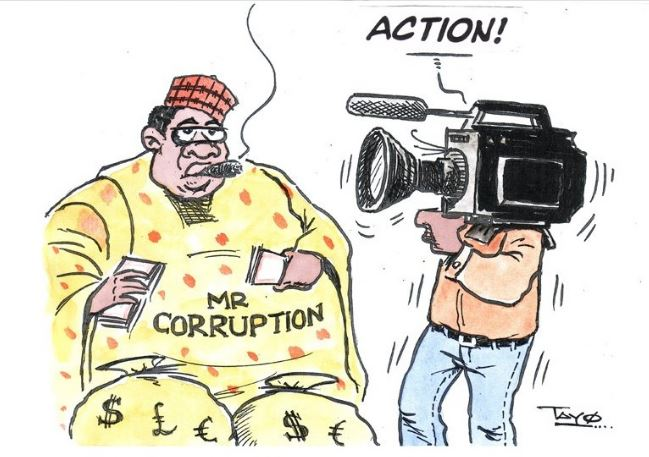 IT is common knowledge that the focus of government in the past one year of the administration of President Muhamadu Buhari has been to drastically reduce, if not eliminate economic malpractices popularly known as corruption, which has been wrecking havoc on Nigerian economy. Apart from the global economic meltdown arising from the plummeting price of commodities, particularly crude oil, which is Nigeria’s main foreign exchange earner, the alarming rate of corruption is evidently another strong reason that the economy is now in recession after recording negative GDP growth rates consecutively in the last two years.

Pundits contend that the estimated sum of money, said to be in excess of three trillion naira so far recovered from treasuy looters, in the past one year of President Buhari’s stewardship, is a sad testimony to how ruinous corruption can be to a society because the stolen funds could have been channeled into provision of medicines in hospitals to boost primary and maternal health care, building of roads to enhance social and economic activities, construction of class room blocks and homes to improve education and the standard of living of Nigerians. But owing to the pillaging instincts of the ‘nefarious ambassadors’ among us, most of the social infrastructures listed above are still acutely in short supply in Nigeria, hence our country is still far from attaining the Millenium Development Goals, MDGs set by the United Nations, UN now repackaged as Social Development Goals, SDGs. Economic malpractices Unlike economic malpractices which politicians have made a song and dance of, the other dimension of malpractices or corruption that have been going on pari-pasu with economic crimes, but largely unnoticed and, therefore, unchallenged, is political malpractice.

This is corruption perpetuated in the political system and driven by the political class. Before dwelling further on political malpractices and the attendant damaging effect on Nigerian economy, it is apropos that we first of all, put in proper context, how economic malpractices have ruptured Nigeria’s socioeconomic fabric. We can do that from the prism of PriceWaterhouseCoopers, PWC, which authored a very grim report titled Impact of corruption on Nigeria’s economy. According to PWC which is an international brand and a global leader in finance and tax advisory services, her investigations reveal that “Corruption in Nigeria could cost up to 37% of GDP by 2030, if it’s not dealt with immediately.” The report states emphatically that “This cost is equated to around $1,000 per person in 2014 and nearly $2,000 per person that lives in Nigeria by 2030”. Furthermore, PwC estimates that the ‘foregone output’ in Nigeria since the onset of democracy in 1999 and the ‘output opportunity’ to be gained by 2030 from reducing corruption to the level comparable to countries like Ghana, Colombia and Malaysia, which are also natural resources dependent economies, would be quite significant. Evidently, the unflattering but credible PWC report is focused on financial crimes, so having highlighted the perverse effect that the unmitigated culture of public officials stealing our common patrimony has foisted on hapless Nigerians, let’s now avert our minds to political malpractice, which is another form of corruption with huge tendency and capacity to hurt society, badly.

In a recent publication by Budget IT-a financial advocacy group in Nigeria, it was observed that while a whooping N2.3bn was allocated in 2016 budget as entitlements of former presidents/heads of state and vice-presidents/chiefs of general staff- I can count such VIPs still alive on the fingers in one of my hands – a paltry N43.7m is the capital allocated to university of Lagos where nearly 70,000 boys and girls applied for admission for the 2016 academic session. If Nigerian authorities truly believe in the conventional wisdom embedded in the axiom “children are the future,” “ knowledge is power” and “education is the key to the future”, why spend nearly three billion naira buffeting expiring leaders and less than fifty million on the leaders of tomorrow? The simple answer is because it is the political class that apportions the funds through budgeting hence they selfishly allocate the ‘lion’ share to themselves. A clear case of misplaced priority. The absurdity does not end there. Information swirling around mainstream and social media indicate that 21 serving senators are still receiving pensions from government, having served as governors and deputy governors before becoming senators.

That means that just like the ghost workers now being weeded out of civil service pay rolls at both the national and state government levels, whereas they are entitled to only one, some of our senators are earning double incomes from government. Upper legislative arm The twenty one, 21 senators who once served as state governors are: Bukola Saraki of Kwara, Musa Kwankwaso of Kano, Kabiru Gaya of Kano, Godswill Akpabio of Akwa Ibom, Theodore Orji of Abia, Abdullahi Adamu of Nasarawa, Sam Egwu of Ebonyi, Shaaba Lafiagi of Kwara, Joshua Dariye and Jonah Jang of Plateau, Aliyu Magatakarda Wamakko of Sokoto, Ahmed Sani Yarima of Zamfara, Danjuma Goje of Gombe, Bukar Abba Ibrahim of Yobe, Adamu Aliero of Kebbi, George Akume of Benue and Isiaka Adeleke of Osun. Former deputy governors allegedly involved in the pension rip-off are that of Ekiti, Biodun Olujimi; Eyinnaya Abaribe of Abia and Danladi Abubakar Sani of Taraba who are now serving senators. To be fair, the aforementioned law makers of the upper legislative arm of government, could have been unintentionally, committing the alleged crime of benefiting from pension emoluments from their previous jobs and at the same time earning hefty salaries and allowances as active legislators, but now that the anomaly has been identified, our distinguished senators should voluntarily relinquish the pension privileges from their former service to the nation and amend the relevant laws to guide against re occurrence. Magnus Onyibe, a development strategist, futurologist and former Commissoner in delta state govt is an alumnus of Fletcher School of Law and Diplomacy, Tufts University, Massachusetts, USA.