Just like last year, 2015 has been a relatively dull year for hip-hop in Nigeria causing many to question whether hip-hop is dying in Nigeria, or if it was ever alive long enough to be considered seriously. Then again it could just be a redefinition of Nigerian hip-hop as we know it transitioning into a genre more in tune with Nigerian ears. However way you look at it though, it’s been relatively quiet for many hip-hop fans. But that doesn’t mean there weren’t some folks doing their thing this year, and putting out solid projects. So without too much gist, let’s get into the top 10 hottest rappers in Nigeria 2015. This is based on released material in late 2014 into 2015. 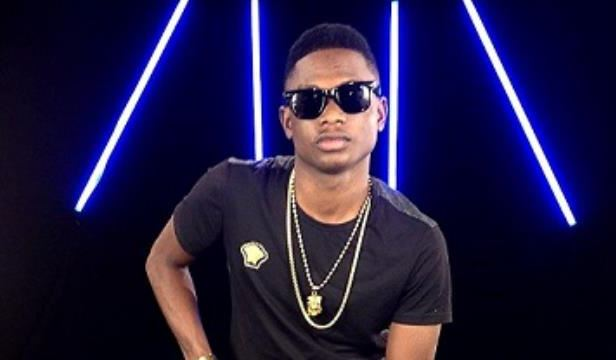 Has there really been a hotter street anthem than Lil Kesh‘s Shoki over the past year? Though it was released in 2014, the tune buzzed very well into 2015, when you have one the hottest tunes like that, along with a slew of other tracks you have to be in contention for one of the hottest rappers of the year. He’s also put out other hot street anthems, Efejoku, Gbese, and just recently, Is It Because I Love You, along with numerous high profile features with the likes of Iyanya, Samklef and Suspect. All in all, 2015 has been a really good year for Lil Kesh, now we expect the album in 2016. 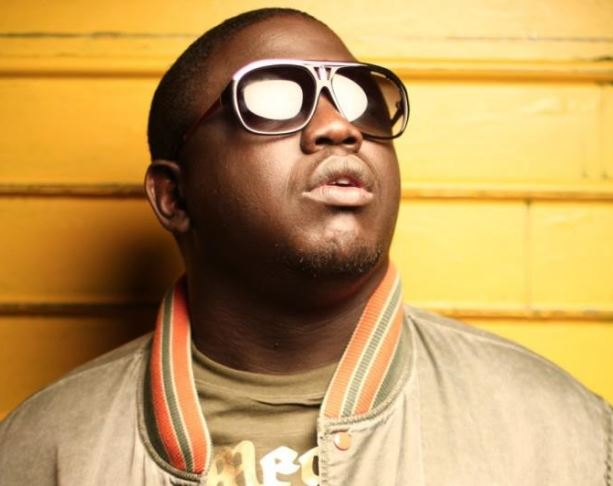 Say what you want about iLLy, he’s one of the most super consistent rappers in Nigeria, steady putting in his work and staying true to his style. He has released a slew of tracks this year alone along with his 3rd studio album, Powerful, which many critics have rated as a solid piece of work. Some folks hate on IllBliss’s style of rap, but what you can’t hate on with IllBliss is his sincere flow. His style hits very well in the streets where it counts the most, and that’s why he’s always booked for shows all year round. 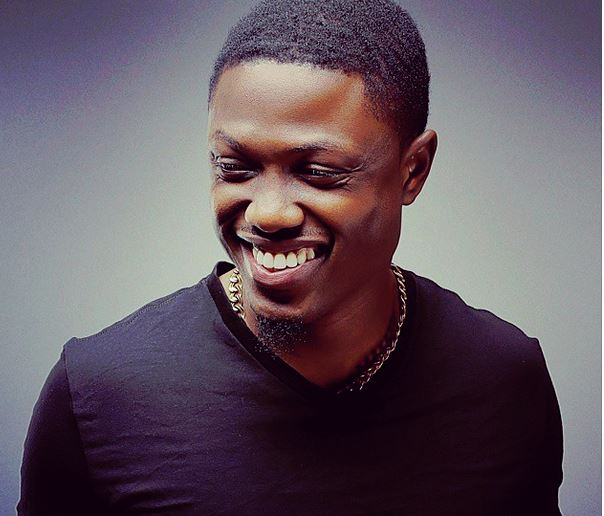 Even though Vector hasn’t released any project in the past year, he’s still been very visible and active releasing a number of dope tracks, the most prominent being King Kong. Vector went ahead to release 3 remixes to the song featuring the likes of Sarkodie, Phyno, Reminisce and Classiq. Vector’s flow is probably his most attractive attribute, with an ability to switch from english to pidgin to yoruba all in one verse. Other dope tracks from Tha Viper include, Kanawan Dabo, and his super nice freestyle, Freestyle Vee. Add the slew of features he’s been on, and it’s been a pretty decent year for Vector, albeit not the hottest. 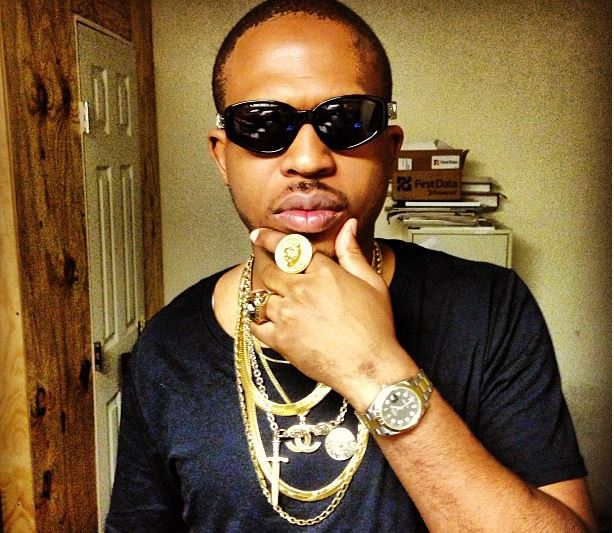 Naeto C had a relatively quiet 2014, and coming into 2015, the general feeling was that maybe his time had passed. With the exception of the generally average Helele, and China, we didn’t get much material from Naeto C. But then just a couple of months ago, Naeto C dropped what many have called the best hip-hop project this year, Day 1. And after listening to it, it’s hard to argue with that. The album features 13 solid tracks and is as hip-hop as you’ll get in 2015. Dope beats, dope bars making a dope project. With many already questioning if Naeto C was done and dusted, it’s good to see Naeto bounce back with a major project in 2015, and that’s why he has to make this list. 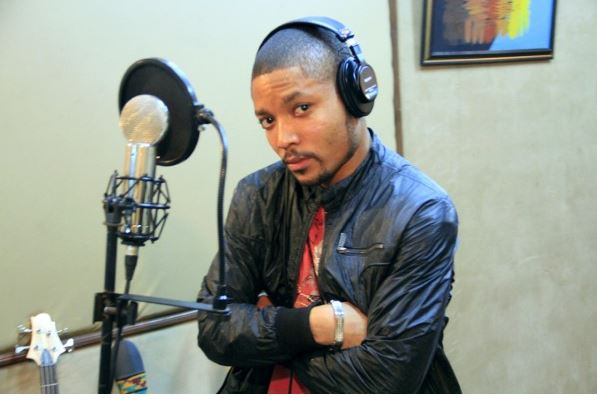 Boogey is one the few purest left in hip-hop in Nigeria. He’s really about his flow, and lyricisms as opposed to catchy beats and singing hooks (no beef at others). It’s no surprise that often times he puts out his music with the lyrics… Just in case you want to really get it. Boogey put out a really dope mixtape earlier this year with producer Charlie X, titled, T.I.N.A.A (This is Not An Acronym), and it’s arguably one of the dopest pure rap projects of the year. At a time where the art of releasing mixtapes is dying, it’s super refreshing to see someone still stay true to the art. This mixtape in many ways reminds one of Nas’ IllMatic…. Pure! READ 6 Famous Musicians Who Sacked Their Family Members Besides the mixtape, Boogey also dropped other singles, and featured on tracks that he pretty much killed. You only have to check his Get Down remake where you can say he kinda outdid what Jay Electronica did on it. 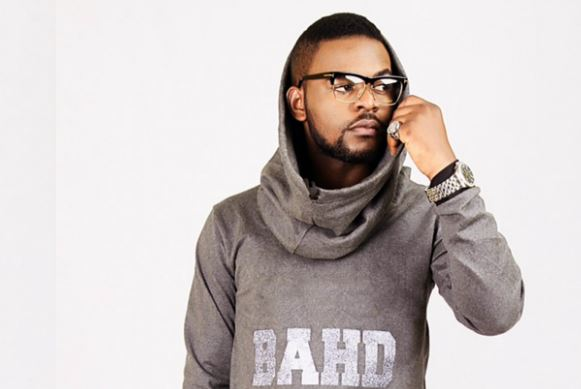 Between his blazing hot tracks, and his hilarious instagram clips, Falz has been one of the hottest names in Nigerian entertainment, especially where the internet is concerned. Sometimes we forget that he’s a rapper first before a comedian. Even though he didn’t have a major project this year, his 2014 album Wazup Guy carrying enough momentum into 2015 with the smash hit, Marry Me featuring Poe & Yemi Alade. In addition to that he’s had a slew of dope tracks and appearances in 2015 including Celebrity Girlfriend, Jamb Question Remix, Ello Bae, and of course the big one, Karashika. Really in 2015, it’s hard to call hot Nigerian rappers without mentioning Falz. 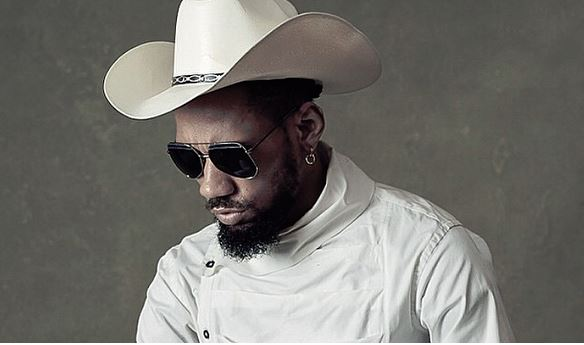 It’s easy to make a case for Phyno being the hottest rapper in the game this year, but for us he lands right here on #4. Between his collaboration album with Olamide, 2 Kings, his heavy singles Nnunu, Connect, and Oringo, and his countless number of heavy hitting singles, it’s easy justify Phyno being one of the hottest in the game in 2015. He brings something different to the game; a certain style, a certain swag. And while rapping in your native language is hot, he’s one of the best right now. Hopefully he wraps up the year with his much anticipated album. 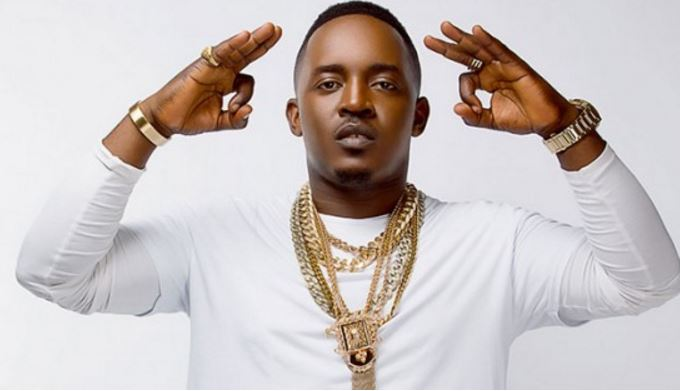 This time last year were you looking at MI suspiciously? Like Bros how far now? You wont be the only one. After a 4 year album hiatus, MI delivered one of the best albums of 2014 in Chairman. The album proved to every hip-hop fan in Nigeria, that MI is still King, and even if he stays quiet sometimes (material wise), he’s still one of the undisputed dopest rappers in Nigeria. It was the best of MI combined with the best of what’s trending now, and the singles carried him well into 2015. The hit tracks from the album Bad Belle, Shekpe, Bullion Van have been in heavy rotation all year round keeping his name hot. Plus he’s done well with jumping on features to keep his name buzzing. 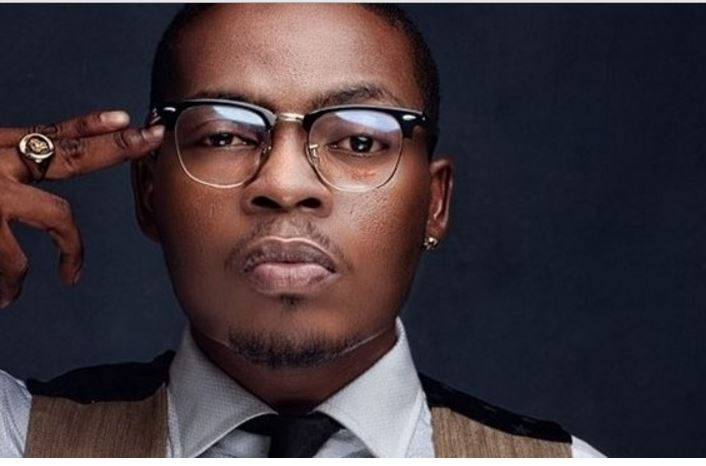 Is Olamide still a rapper? That’s the question many people have been asking since Olamide has switched up his style a little in the past year. Well is Drake still a rapper? And he’s a self proclaimed singing nigga. So yea, Olamide is still a rapper. Even if his big tunes see him singing, he still drops bars seriously, and his 2 Kings album with Phyno is testament to that. Now when you get over his status as a rapper, you’ll see that Olamide is one of the hottest artist in Nigeria never mind just as a rapper. Look at the hit list, and you’re bound to find Olamide on there. Bobo, Lagos Boys, are just a few of the numerous tunes Olamide dropped this year that had made major impact. When you have the whole country dancing Shakiti Bobo, I don’t think many people care how you do it. Rap, Sing or Cough. 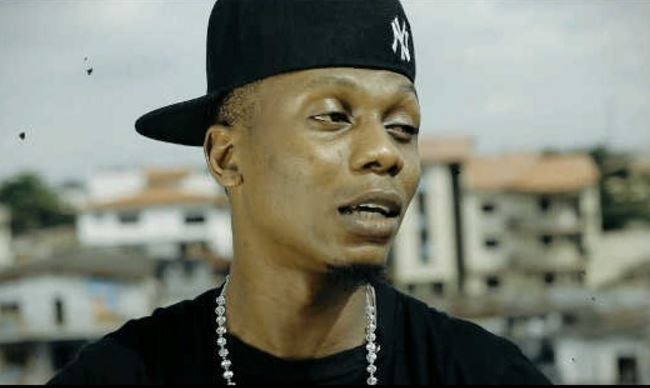 Reminisce is arguably the rapper of the year in 2015, and that’s a big argument because depending on what day of the week, you can make a case for Olamide also, but for the hip-hop joints he’s dropped in 2015, we’ll give the nod to Reminisce. Reminisce dropped one of the hottest pure hip-hop tracks in 2015, Local Rappers, and followed that up with another dope joint, Skilashii. All this leading to his 3rd studio album, Baba Hafusa, which stayed up on the the iTunes chart for weeks. Throw in his numerous dope features through the year, one of the best being Shekpe on MI’s Chairman, and it’s not hard to see how Reminisce might be on top of Hip-Hop in Nigeria in 2015. His flow, his bars, his brand, and general commercial acceptability have all gone up a big notch in 2015.