The National Flag of the Federal Republic Nigeria is divided, vertically, into
three equal parts. The central part is white while the two outer parts are green.
The two green parts represent agriculture while the white represents unit and
peace.

The flag was designed in the twilight of colonial rule in 1960 by Mr. Michael
Taiwo Akinkunmi, the a student in London. His design was adjudged the best out
of 2,000 entries for the National Flag Design Competition. It earned him a cash
prize of 100 pounds, paid to him through the then Nigeria High Commissioner
to the United Kingdom, M.A. Martins (The Guardian, 1996 and 1999).

The Nigerian coat-of-arms, feature an eagle mounted on a black shield, which
is tri-sected, by two wavy silver bands. Two white chargers support the shield,
and at its base is a wreath (coctus spectabilis flowers, cast in the national
colours of white and green.

The black shield represents the fertile soil while the silvery bands denote
the Niger and Benue rivers which form the main inland waterways in the country.
The coctus spectabifis is a colourful flower which grows wild in Nigeria. The
eagle stands for strength and the chargers symbolise dignity. The national mott
originally "Peace, Unity, Freedom" was changed the to "Unity
and Faith, Peace and Progress" in 1978.

The Nigerian national flower is the Coctu Spectabilis. It is a very common sight
in the Guinea Savanna, which is the most extensive vegetation belt in Nigeria,
occupying nearly half of the country's land area. 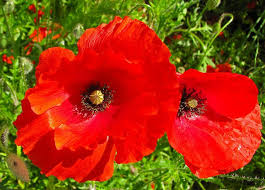 Anthem are as follows:

To serve our fatherland

With love and strength and faith

The labor of our heroes past

Shall never be in vain

One nation bound in freedom, peace and unity.

Oh God of creation, direct our noble cause;

Help our Youth the truth to know

In love and honesty to grow

And living just and true

To build a nation where peace and justice shall reign.

THE NIGERIAN NATIONAL PLEDGE
The National Pledge is recited by all school children at the beginning and end of each school day. The wordings of the National pledge are as follows:

I pledge to Nigeria, my country
To be faithful, loyal and honest,
To serve Nigeria with all my strength,
To defend her unity and uphold
Her honor and glory.
So help me God.

The National Motto is "Unity and Faith, Peace and Progress".