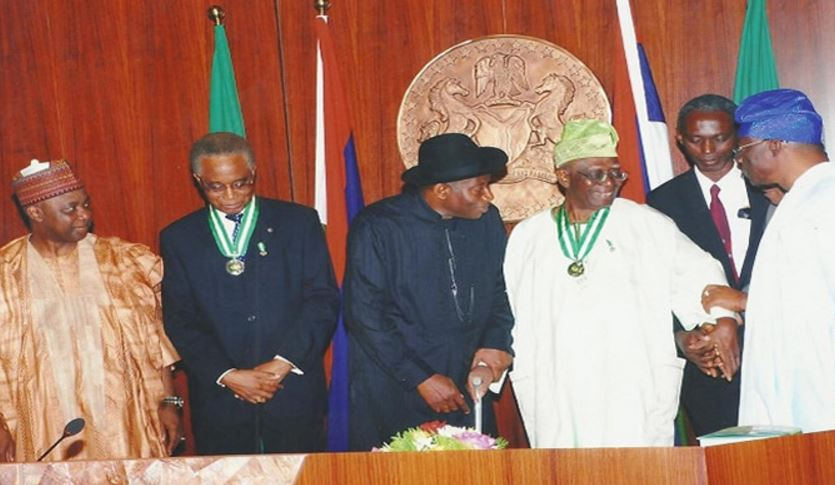 Every nation has a system of recognizing and rewarding the outstanding feats and achievements of its citizens. Such recognition and reward place on record public appreciation for the contributions of those citizens who have distinguished themselves in their services to the nation. They are also instruments for motivating the wider citizenry to strive for greater heights and to con-tribute more actively towards promoting the nation's intellectual, creative and societal value systems. The Nigerian Government, over the years, has instituted several categories of honours and awards that are conferred on Nigerians who have distinguished themselves in various fields of endeavour.

Most notable among such honors and awards are:

THE NATIONAL HONOURS The National Honors were instituted by the National Honors Act No. 5 of 1964, during the First Republic, to honour Nigerians from all walks of life, who have rendered special and outstanding services in their various callings, to the benefit and progress of the nation. The Act empowers the President of the Federal Republic to make provisions for the award of honours, decorations and dignities. The awards are to be conferred "on tie advice of the Premier of a Region (Governor of a State) in respect of services to the Region (State)." The Act established two Orders of Dignity known as the Order of the Federal Republic and the Order of the Niger. Each Order consists of four ranks; the first and highest is that of Grand Commander; the second is that of Commander; the third is that of Officer; and the fourth that of Member.

The National Honours, in descending order of importance, are:

Two medals were subsequently added to the list. These are:

1. Federal Republic Medal; and,
2. Order of the Niger Medal

The Award is open to only citizens of Nigeria, but honorary awards can be conferred on non-citizens.

The National Committee for National Honours and Awards usually invites nominations from the office of the President, the Chief of Defence Staff, Inspector General of Police, Federal Civil Service Commission, State governments, the Chief executives of the Manufacturers Association of Nigeria (MAN) and the National Association of Chambers of Commerce, Industry, Manufacturing and Agriculture (NACCIMA). The final decision on the awards is however largely left to the discretion of the President, and the only criterion is meritorious and distinguished service to the nation.

The conferment of the National Honours on deserving citizens suffered a lull between the mid 1980s and the late 1990s. However, in 1998, the then Head of State, General Abdulsalami Abubakar, resuscitated the tradition.

Following a call for nominations by the office of the Secretary to the Government of the Federation (SGF) in November 1998, the Government, in January 1999, released the names of 755 Nigerians to be conferred with various categories of the awards. All former Presidents and Heads of State, excluding the late General Sani Abacha (who ruled the country from November 1993 to June 1998) were awarded the nation's highest national honour, the Grand Commander of the Federal Republic (GCFR).

Other key government functionaries in all the administrations since independence in 1960 were also listed for one or other category of the awards. However, in January 2000, the present administration of President Obasanjo put the conferment of the all the awards on hold.

All recipients of National Honours and medals are expected to conduct themselves always as role models in society. The first two Nigerians to be awarded the prestigious GCFR were Dr. Nnamdi Azikiwe and General Olusegun Obasanjo. The investiture was performed on 23 September, 1981 by President Shehu Shagari.

NIGERIAN NATIONAL MERIT AWARD The Nigerian National Merit Award was established in 1979 by Act No. 53 to award prizes to citizens of Nigeria for outstanding intellectual attainment, academic performance and contribution to national development in the areas of science, technology, medicine, humanities, arts and culture and any other field considered deserving by the Board of Trustees. It was instituted, according to the then Head of State, General Olusegun Obasanjo, "to accord recognition to outstanding and original contributions to national development."

The Nigerian National Merit Award is different from the National Honours and Awards, which are conferred on persons who have rendered meritorious service to the nation. The Merit Award is specifically designed to encourage Nigerians to be devoted to the search for solutions to the nation's problems in their various disciplines. The stated objective is to encourage Nigerians to concentrate their intellectual energies in academic work, which is Nigerian in content, universal in distinction and beneficial to the Nigerian society in p8rticuiar, and to humanity in general.

The Merit Award is administered by a Board of Trustees appointed by the President, and is largely insulated from political interference in order to ensure that it retains its enviable position as the highest national award for intellectual and academic excellence. The Board is, however, expected to take cognizance of men and women whose out-standing intellectual and academic contributions to national development have not won international accolades. Guidelines for consideration of nominees for the award are as follows:

a. The award is open to all citizens of Nigeria.
b. Selection is made from a wide range of contemporary works, which are innovative, creative, essentially Nigerian in content, and of international distinction.
c. The accomplishment (in Science and Technology), for which an award is to be made, should be qualitatively and quantitatively beneficial to the Nigerian society in particular, and to humanity in general.
d. The work should promote Nigeria's image, culture and reputation as a nation.
e. The achievement may constitute a specific breakthrough in any field, or may be of a cumulative nature.

The procedure for nominating individuals for the award are as following???

1. Nominations may be made by individuals or their sponsors.
2. Each nomination should include the curriculum vitae of the nominee, and should indicate the area of activity/accomplishment and the reason(s) why the nominee is considered eligible for the award.
3. Each application/nomination should be accompanied with all relevant information and documents, which may be considered useful in the assessment of the candidate.
4. A closing date for the receipt of nominations is usually fixed and published.
5. The Committee of Assessors does not enter into any correspondence in respect of any application/nomination.

The history of the National Productivity Merit Award (NPMA) is rooted in the continued search for ways and means of boosting productivity in the nation's economy. The objective of the award is to establish and institutionalize a culture of productive work ethics.

The Award is intended to provoke a more positive attitude to work among Nigerians and to serve as a spice to higher productivity. Its purpose is also to widen the scope of productivity awareness in Nigeria and, thus, stimulate productivity conscious-ness, productivity re-orientation and re-awakening among the citizenry. The Award is designed to affect productivity positively at both individual and corporate levels.

At the individual level, the award is intended to encourage such noble attributes as expertise in job performance, dedication, hard work, initiative, creativity, honesty, reliability, self-discipline, moral leadership, responsibility, punctuality, teamwork, contribution to the building of communities and organisations, and good human relations.

At the cooperate level, the National Productivity Merit Award seeks to acknowledge organisations that are self-reliant in their adaptation and application of technology in order to guarantee for them-selves cost effective operation and productivity efficiency. Also, the award recognizes companies which show a trend for sustained increases over the years in such vital areas as local sourcing of raw materials, capacity utilization, sales turnover, profitability, employee welfare schemes and training facilities.

From its inception in 1991 until the 8th edition of the award on 7 April, 1999, a total of 147 individuals and 34 organisations were conferred with the award. Laureates are entitled to use the acronym NPMA after their names.

On 23 January, 1995, the Federal Government declared that 14 September of every year should be observed as a National Day of Creativity. The declaration was in line with the signing of the Bern Convention for Protection of Literary and Artistic Works and was intended as a day "to further draw attention to the contribution of creativity to our national development effort" The observance of the day, therefore, was intended as an occasion for the nation to showcase its immense talents in the arts, sciences and technology.

A high point of this observance is the National Creativity Award, instituted by the President Obasanjo administration in 1999. The award is aimed at acknowledging artists and other creative talents of distinction and encouraging others to strive for excellence in their various callings. Soon after it assumed office, the Administration constituted-ed a committee to establish the criteria and procedures for conferring the award on deserving Nigerians. On 14 September, 1999, the renowned novelist, Professor Chinua Achebe, author of the highly acclaimed Things Fall Apart and father of modem African literature, was announced the maiden winner of the National Creativity Award. The award carries a cash prize of one million naira (approximately 10,000 U.S. dollars).

The government intends to establish a culture fund through which it will involve the private sector in sponsoring the award in future and the annual event is to be managed by a Board of Trustees.

In Nigeria, as in the rest of the world, the 21st century, just beginning, will be a more competitive age than was ever the case in the past. With the expected revitalization of Nigeria's public institutions and the resurgence of intellectual creativity that is bound to follow the return of democracy in May 1999, it is expected that these awards will be more keenly contested in the years ahead.

Accordingly, the laureates and awardees of the future may even be more highly distinguished than those of the past. And there is every reason to expect that the coming generation of honour and award recipients will exert a more salutary effect on the citizenry and inspire all Nigerians to contribute their very best not only towards the improvement of Nigeria but, indeed, towards improving the overall condition of mankind.

I DO NOT KNOW WHY THE LIKES OF LATE VENERABLE ARCHDEACON B.A. ADELAJA HAVE NOT BEEN GIVEN NATIONAL AWARD POST HUMOUSLY, LATE J.K. RANDLE AND MANY MORE