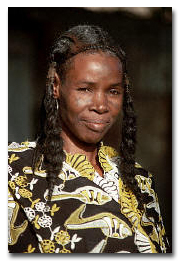 Picture of a Fulani woman

Fulani, people of Africa numbering about 7 million and dispersed in varying, often sizable, concentrations throughout the grassland areas of West Africa from Senegal and Guinea to Nigeria, Cameroon, and Chad.

Their Fulfulde language is closely related to the languages of Senegal, suggesting the possibility that their ancestors migrated from the Middle East through North Africa to Senegal. By the 10th century, they had adopted a new language in Senegal and begun to spread eastward, reaching present-day Nigeria by about the 14th century.

A number of African states, including ancient Ghana and Senegal, had Fulani rulers. The Fulani became zealous Muslims (11th cent.), and from 1750 to 1900 they engaged in many holy wars in the name of Islam. During the first part of the 19th cent. the Fulani carved out two important empires. One, based on Massina, for a time controlled Timbuktu; the other, centered at Sokoto, included the Hausa States and parts of Bornu and W Cameroon. The Fulani emir of Sokoto continued to rule over part of Northern Nigeria until the British conquest in 1903. The Fulani of Massina were conquered (1861) by Hajj Omar, but their resistance ultimately resulted in his death.

Although traditionally most Fulani have been cattle herders, through the centuries many settled down and turned to politics, successfully establishing a series of kingdoms between Senegal and Cameroon by the 19th century, and conquering the Hausa by about 1810. The Fulani held much of northern Nigeria in subjection until defeated (1900-1906) by the British. The religious beliefs of a large percentage of the cattle-herding Fulani are animistic, although many of the politically oriented Fulani are Muslim and have often justified their conquests on religious grounds.