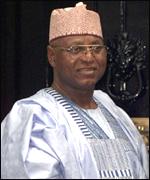 Abacha's death was strange and totally unexpected, but the succession was fast and clear. Gen Abdulsalam Abubakar, his loyal Chief of Defence Staff, stepped immediately into his shoes as president.

Abubakar was not the most senior soldier. He even had to be promoted to the rank of full general as he took up his new appointment as president, but he was seen as a professional soldier with no political ambitions of his own. He had always been totally loyal to Abacha and had even set up the military tribunal that had tried and condemned to death Abacha's former No.2, Gen Oladipo Diya and the five other senior officers, arrested for plotting the anti-Abacha coup in December.

Gen Abubakar is seen to be an Ibrahim Babangida man. He was a classmate of the former president at Bida school and the two men have neighbouring houses in the Niger state capital, Minna. Babangida has come out strongly in support of Abubakar since Abacha's demise.

The inner councils of the military establishment chose Abubakar, not because he was the most obvious successor, but because he was a compromise candidate with no apparent personal political ambition of his own. He may yet be an interim choice, vulnerable to a coup if he decides that he likes power and wants to hang onto it as a military ruler. Other factions in the army may depose him if he hastens too fast towards civilian rule or is too soft over the release of detainees.

Before Abacha's sudden death, Abubakar was one of those pressing for a rapid end to military rule. Speaking at a seminar to mark Navy week, a short time before Abacha died, he said "the survival of the country depends on a rapid and peaceful transition to a lasting democracy". Clearly he then had in mind proper civilian elections according to the original timetable